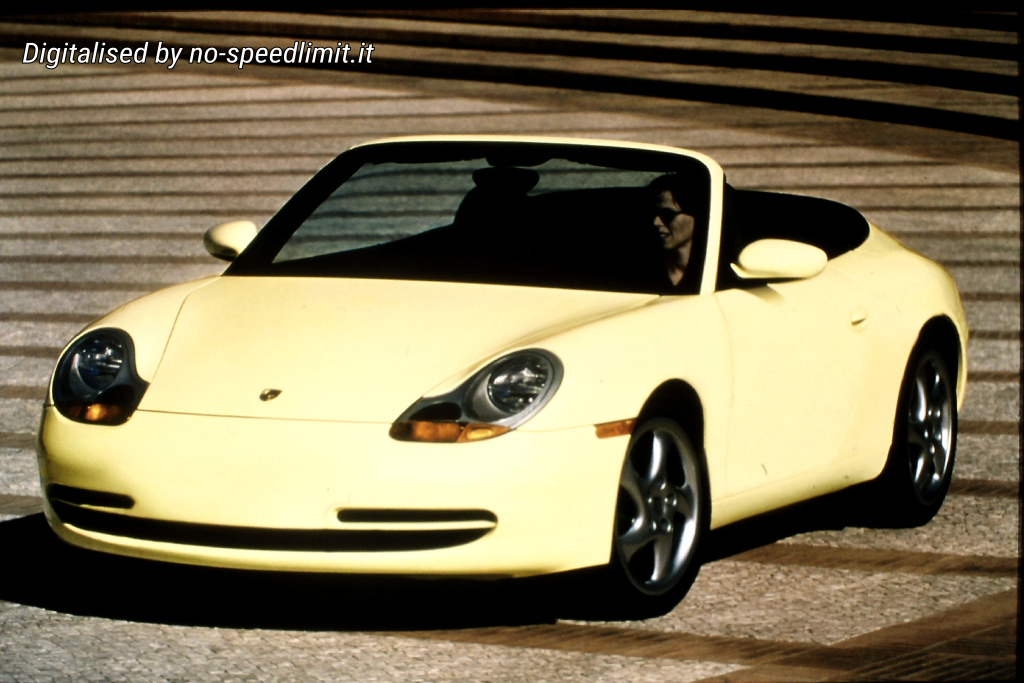 
Porsche introduces its 1999 911 Carrera Cabriolet sports car to the North American market this week at the 1998 New York International Auto Show. The new open-cockpit model is a companion to the 1999 Porsche 911 Carrera Coupe which debuted earlier this year. Together, they represent the first all-new Porsche 911s in the 34-year history of the famed sports car model.

The new 911 Carrera Cabriolet is equipped with an electronic soft top which raises or lowers in just 20 seconds. This procedure can be initiated by either pushing a button on the center console or turning the key in the door lock. To maintain the model's sleek appearance, the top folds beneath a metal body flap when lowered. For durability, the top is made of elegant "Sonnenland" fabric. Inside, the roof rods are covered by a headliner. This feature, combined with intensive acoustic detail work, has significantly reduced wind noise with the top raised.

For added versatility, an optional aluminum hardtop is included at no extra cost. Weighing just 71 pounds (32 kilograms), it features a heated rear glass window, hat shelf, and two-shell construction for added strength and reduced wind noise. It can easily be installed by two people with a few simple flicks of the wrists.

Passive safety on the new 911 Carrera Cabriolet is exemplary. The newly designed body structure not only was developed for engineered deformation during crashes, but also offers significantly higher strength. Full-size driver and front passenger air bags are standard equipment as are large 30-liter which provide protection for the head, chest and pelvis even with the top and side windows down.

For added safety in the event of a rollover, the new 911 Carrera Cabriolet is equipped with two supplemental safety bars. Discreetly hidden behind the rear seats, they are triggered by spring pressure when a tilt sensor determines the risk of a rollover.

Developed concurrently with the Porsche Boxster to maximize production efficiencies and keep costs under control, the 1999 Porsche 911 Carrera Coupe and Cabriolet share many design, technological and engineering features with the two-seat roadster which was introduced last year. Among the shared features are totally new liquid-cooled engines, brake systems, optional child seats which can automatically deactivate the passenger air bag system" and, clearly, a strong family appearance.

From both a design and engineering perspective, however, the 1999 911 Carrera Coupe and Cabriolet are quite obviously Porsche 911s. As with every 911 model since its introduction in 1965, the new Carrera Coupe and Cabriolet are powered by horizontally opposed, six-cylinder, boxer motors mounted behind the rear axle. The new engine is more compact, yet more powerful and fuel efficient, than its predecessor.

While the new 911's body is longer, wider and sleeker than any before it, offering greater passenger cabin space and refinement, its design distinctively is an evolutionary one, inspired by the car's heritage.

Rounding out the list of standard features for every 1999 911 Carrera sold in the United States and Canada is a four-year (doubled from two), 50,000-mile (80,000 kilometer) limited warranty. 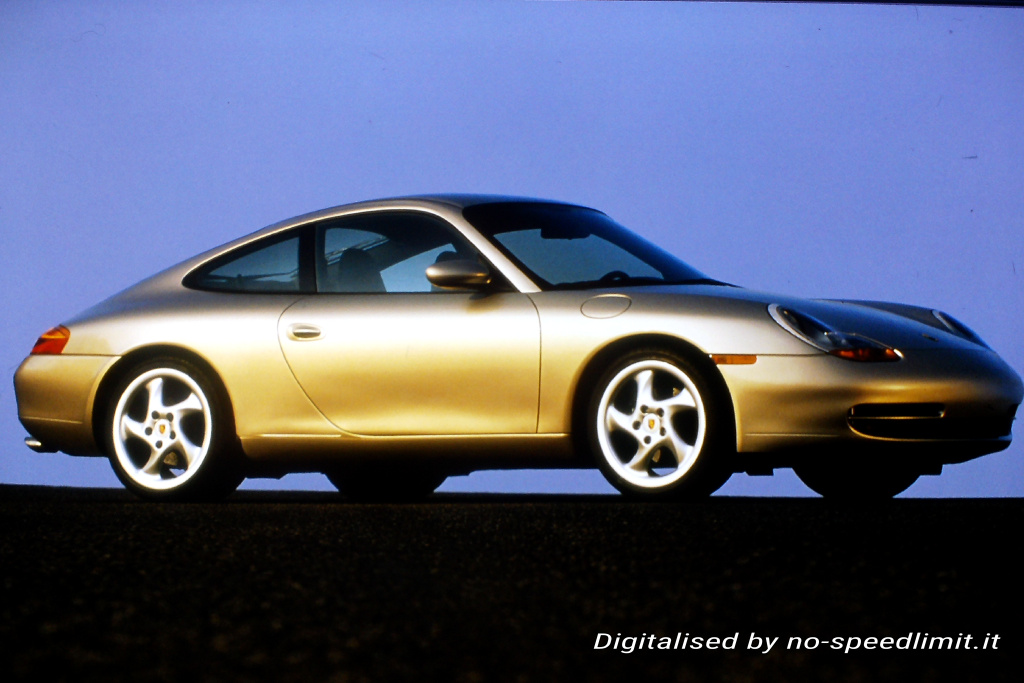 Over the previous model's lifetime, its body had been refined several times. However, in the course of its 34-year life, the roofline and windshield had always remained the same as the original 1965 model. For 1999, the roofline as well as the windshield and every other body section is totally new.

By smoothing the 911's flanks, raking the windshield more, designing windows that fit flush to the sheetmetal, and minimalizing joints and seams, Porsche's designers have reduced the 911's coefficient of drag from the previous model's 0.34 to 0.30.

From its front bumper to the windshield, the 911 shares its look and contours with the Boxster. From the front A-pillars back, the Carrera is unique. The Coupe's A pillars have a more rakish angle than ever before, as the windshield angle has been revised from the previous 60 degrees to 55 degrees.

The car's body is largely constructed of high-strength steel and helps form the vehicle's structure. In fact, the new body is even structurally stiffer than its predecessor. Torsional stiffness, or resistance to twisting motions, has been increased by 45 percent. Bending stiffness has been increased by 50 percent. These increases in structural rigidity increase handling performance as well as improving ride comfort and reducing interior noise. Predetermined deformability of the steel plate body helps to minimize loads acting on the car's occupants in an accident.

The quieter, smoother ride is complemented by the 911's new passenger cabin. Larger interior than before with more space in every dimension, the Carrera's passenger compartment offers a new dashboard design, instrument panel layout, dual front and side air bags, a telescoping steering column and an automatic temperature control system. Also noteworthy-for the first time, the 911 has suspended brake and clutch pedals. The accelerator pedal is still floor mounted.

Porsche's new Side Impact Protection System incorporates both energy-absorbing door linings and door-mounted air bags which cover the entire side areas regardless of driver and passenger seating positions. The design enhances protection of the driver's and passenger's head, chest, arms and hips.

With its additional wheelbase and increased length, the 1999 911 Carrera has more front and rear legroom as well as cargo space behind the rear seats. Thanks to the lower floor and reshaped roofline, there is also additional headroom. In fact, the new 911 Coupe with a sliding sunroof has more headroom than the previous model had without one.

Like the instrument panel of the Boxster, the Carrera offers redundant speedometers-a digital speedometer at the bottom of the prominent tachometer echoes the analog unit beside the tach-as well as a coolant temperature gauge. 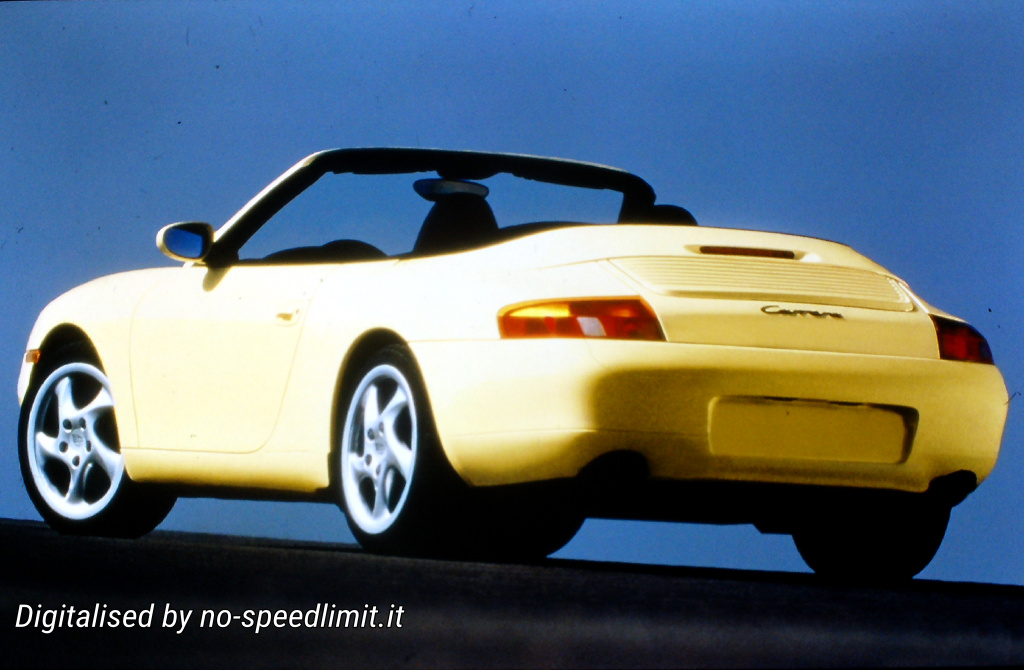 As has been the car's history, the 1999 Porsche 911 is powered by a six-cylinder boxer engine, mounted in the rear. However, for the first time in its 34-year life, the 911 engine is fully liquid cooled. Porsche engineers decided to use a six-cylinder horizontally opposed engine for the same reasons as previously: the engine's low center of gravity, compactness, smoothness and durability.

Besides its basic configuration, the new engine design shares many features and specifications with its predecessor. The 11.3:1 compression ratio is the same as before, as are its bore centers, which are spaced 4.65 inches (118mm) apart. These are the same bore centers as the Boxster engine to allow efficient manufacturing and reduced costs. Efficiencies are further increased with the 911 engine's two cylinder heads being identical and interchangeable. However, unlike its predecessor, this engine's oil reservoir is integral with the engine, not a remotely mounted tank. Porsche refers to this design as integrated dry sump lubrication. Other innovations to the engine include a dual-stage intake system with a computer-controlled valve and the lack of an ignition distributor-each cylinder has its own ignition coil attached directly to its spark plug. 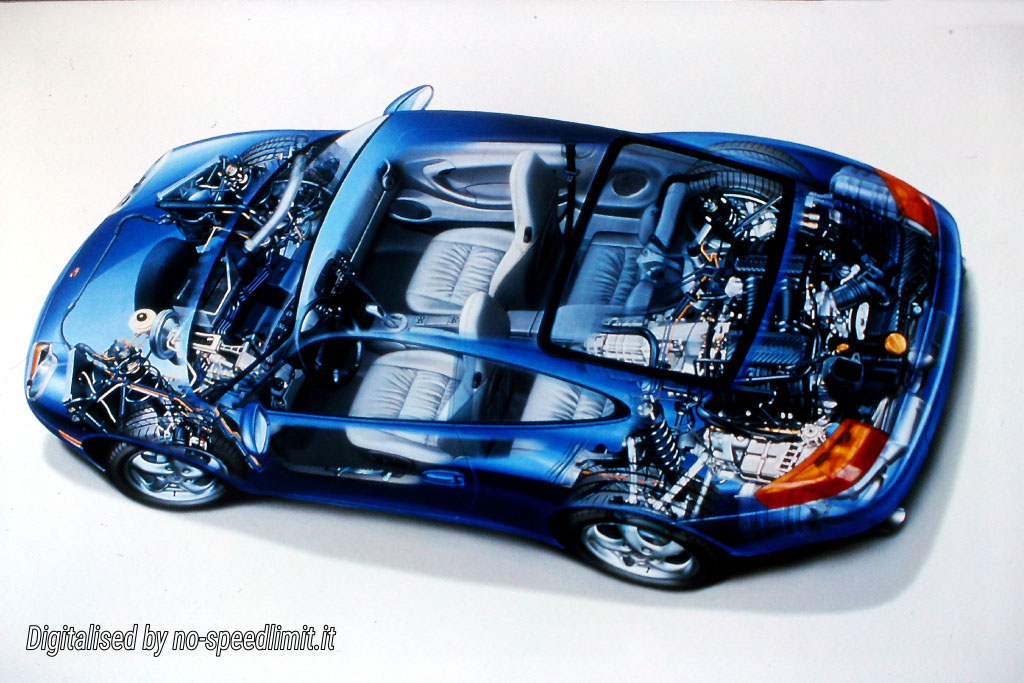 The new Porsche 911 Carrera may be equipped with either a manual transmission or, as an option, Tiptronic S automatic gearbox driving a limited-slip differential. Both transmissions have been substantially refined and changed from their predecessors.

As with the Boxster, the Carrera uses a dual-mass engine flywheel and a cable-type shift mechanism to isolate the driver and the shift lever from movement and noise from the manual transmission. The ergonomically designed aluminum shift knob follows a four-column shift pattern.

The six-speed manual gearbox features full synchronization, including reverse, with external dual-cone synchronizers. To better take advantage of the new engine's torque and power characteristics, the 911's gear ratios have been altered from the previous model, though its final drive remains the same. Sixth gear is an overdrive, and the car's top speed is attained in sixth.

As on the previous 911 and the Boxster, the five-speed Tiptronic S offers the driver the choice of allowing the transmission to shift through the gears automatically or to manually shift up and down. For 1999, the Carrera's Tiptronic S, like the unit in the Boxster, has five forward gears, with closer gear spacing than before, for better use of the engine's power and torque. Fourth gear is a direct 1:1 drive, while fifth is an overdrive for reduced fuel consumption and noise while cruising. Leaving the gear selector in "D" allows the transmission to operate like other automatic transmissions, while moving to "M'' means the steering wheel spoke mounted buttons control up- and downshifts according to driving style and conditions.

For 1999, the Carrera may also be equipped with Porsche's automatic brake differential (ABD), a traction control system to help start the car moving on slippery surfaces. The system relies on both the ABS and engine management electronic control units to apply and release the brakes (cycling in fractions of a second) to prevent each driving wheel from spinning. ABD also prevents the two driving wheels from spinning concurrently by adjusting both the ignition and fuel injection to reduce engine power. 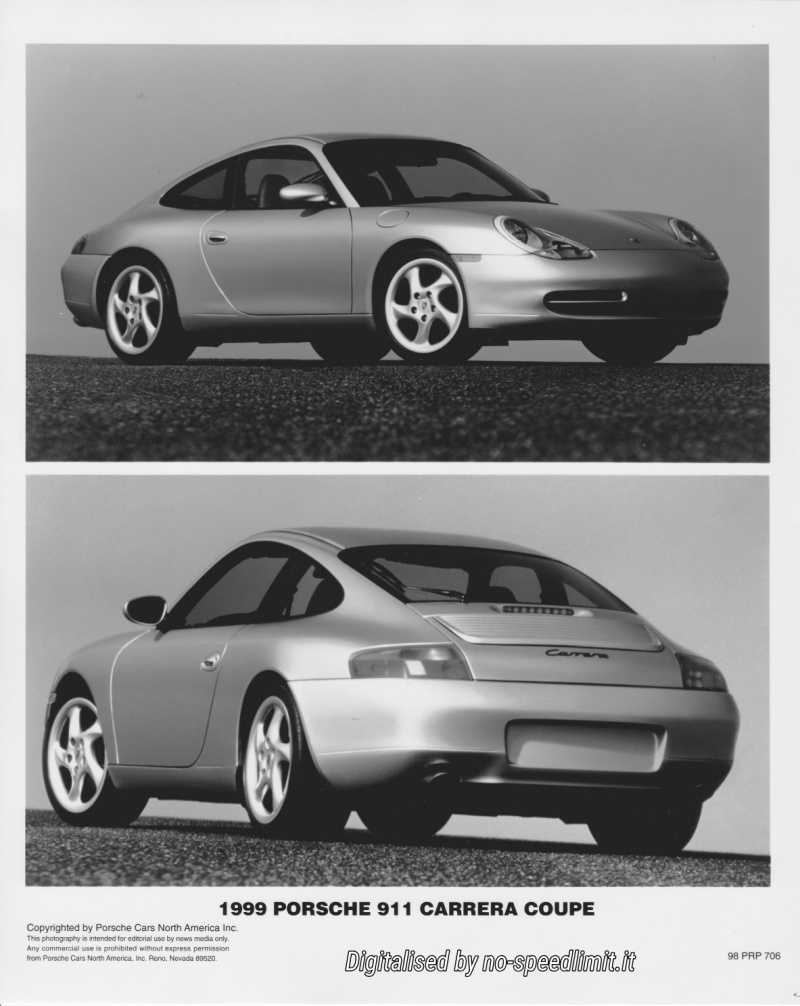 As befits an ultra high-performance sports car, the new 911 has an independent suspension system. Like the Boxster and previous 911 models, the 1999 Carrera uses a MacPherson strut-type front suspension. The rear suspension is a unique five-link setup with Porsche's "Weissach" toe-in/toe-out correction for neutral behavior during cornering. In addition, the car features force-sensitive power-assisted rack-and-pinion steering as well as four-wheel disc brakes with ABS.

Both front and rear suspensions are made of forged and cast aluminum components and are attached to the car's structure via aluminum alloy subframes for improved isolation and chassis stiffness, Gas-charged shock absorbers are used front and rear.

The steering wheel features a telescoping adjustment and can be moved a total of 1.6 inches (40 mm) toward or away from the driver to comfortably accommodate any driver from a fifth percentile female to a 95 percentile male. With the new steering gear, for the first time mounted ahead of the front axle to improve steering response, the 911's turning circle has been reduced to 34.8 feet (10.6 meters). 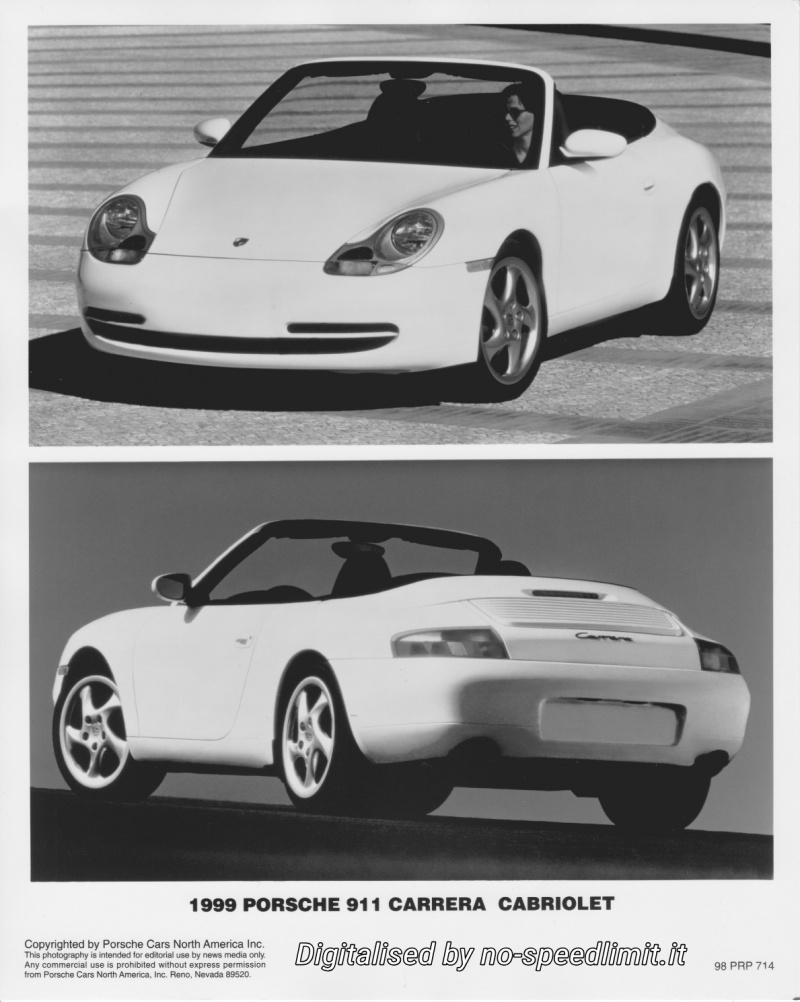 The 1999 911 Carrera is equipped with a high-pressure spare tire, replacing the previous model's collapsible unit. And, due to an increase in its size, the front luggage compartment now easily holds a flat tire.

Every 1999 Porsche 911 Carrera sold in the United States and Canada is covered by a four-year, 50,000-mile (80,000 kilometer), bumper-to-bumper limited warranty, which includes Porsche's roadside assistance program. The galvanized body and 26-step paint and anti-corrosion process enable Porsche to warrant each car against rust perforation for 10 years and unlimited mileage. 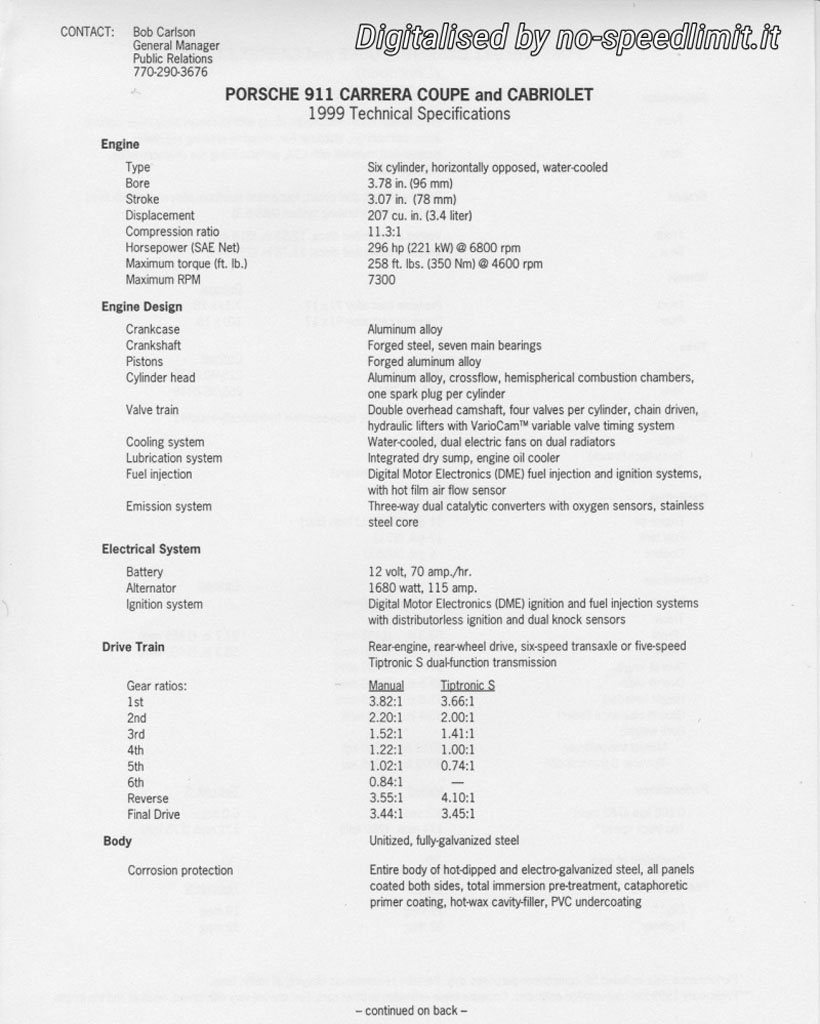 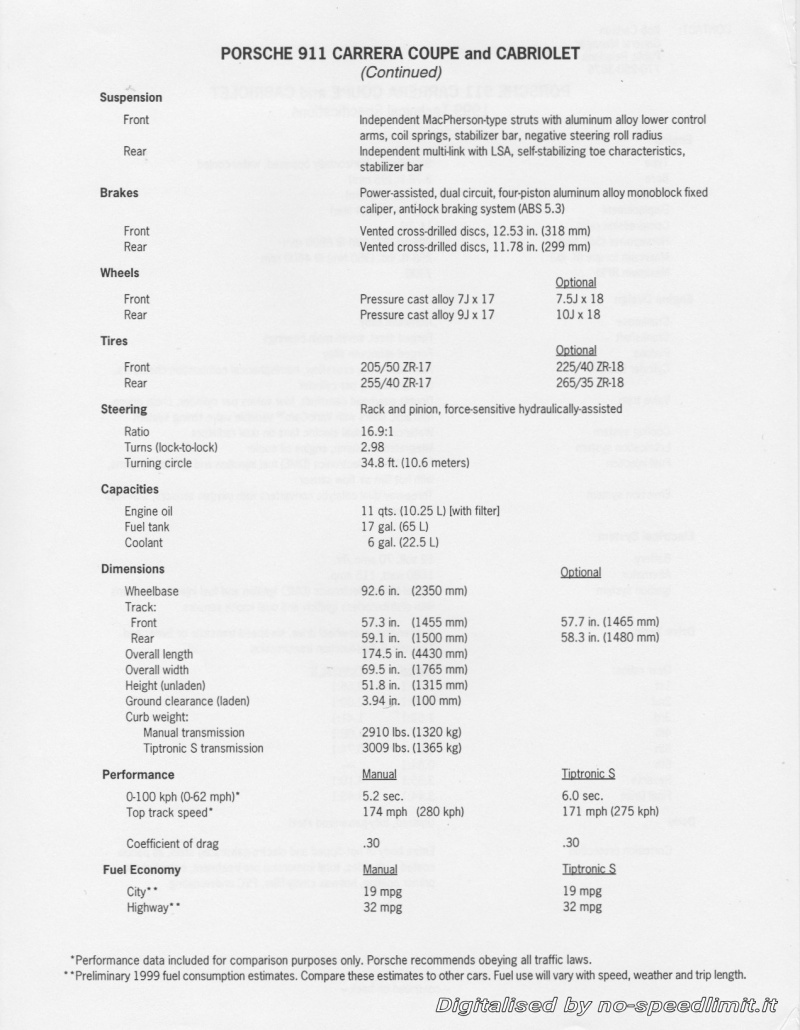 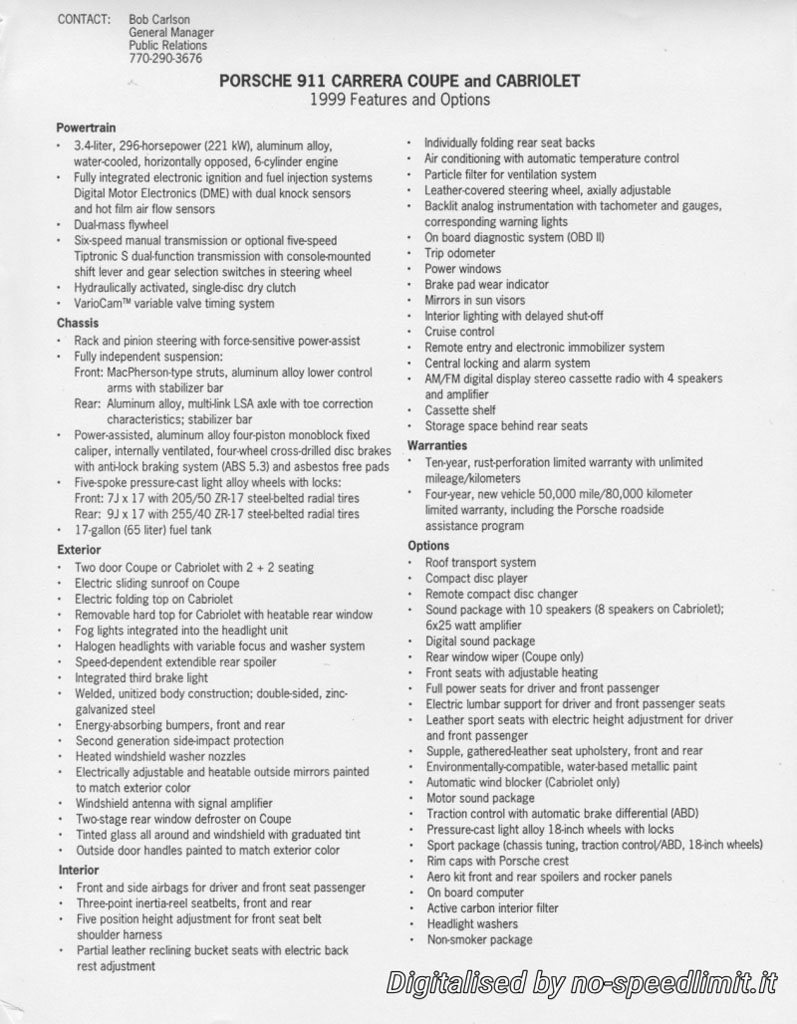 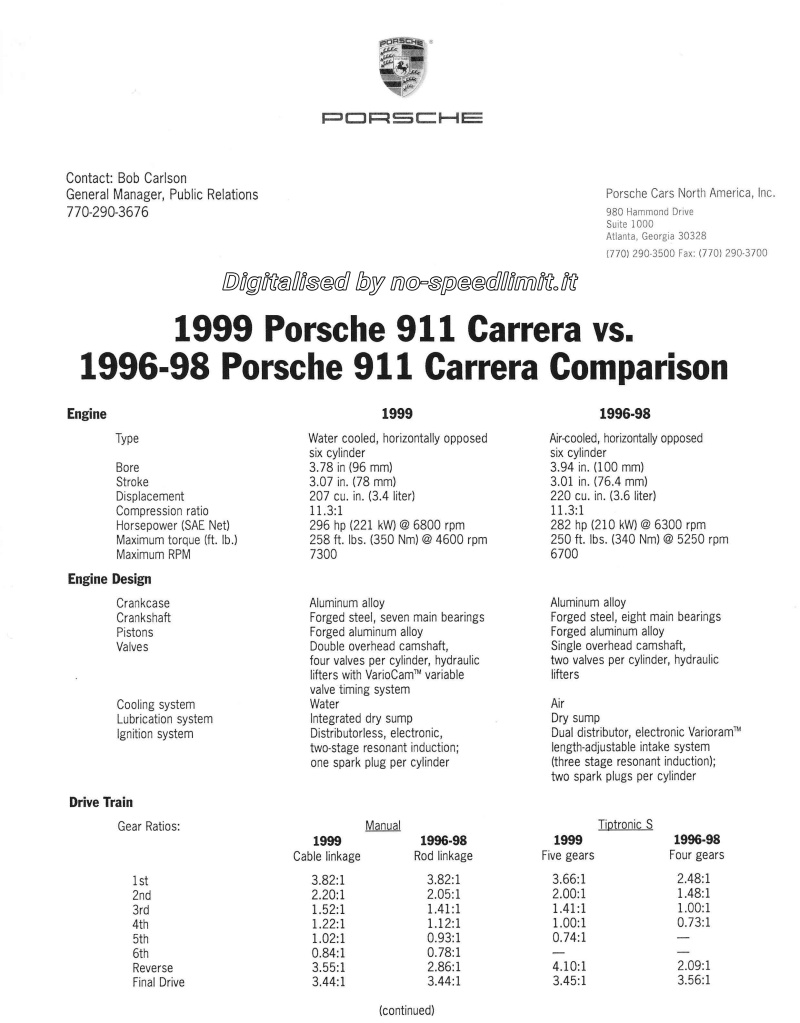 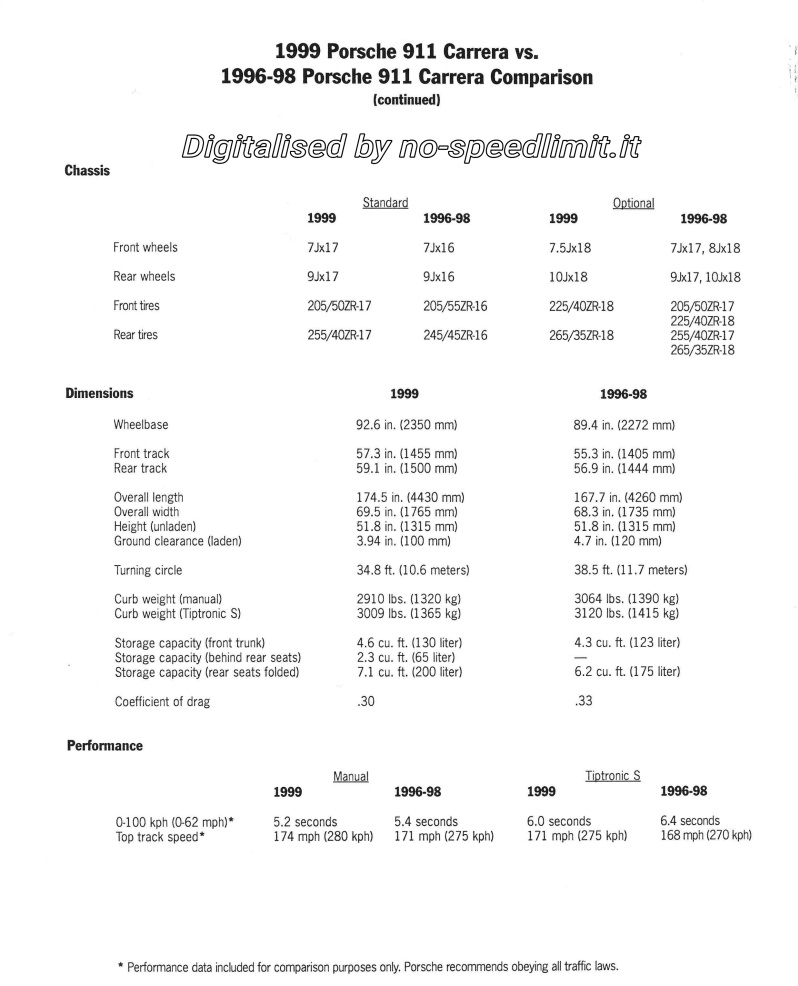