"These are exceptional performance figures for an automobile containing every driver comfort," said John A. Cook, president of Porsche Cars North America, Inc. "Drivers can drive the 928S 4 for hours at a tíme without getting tired." 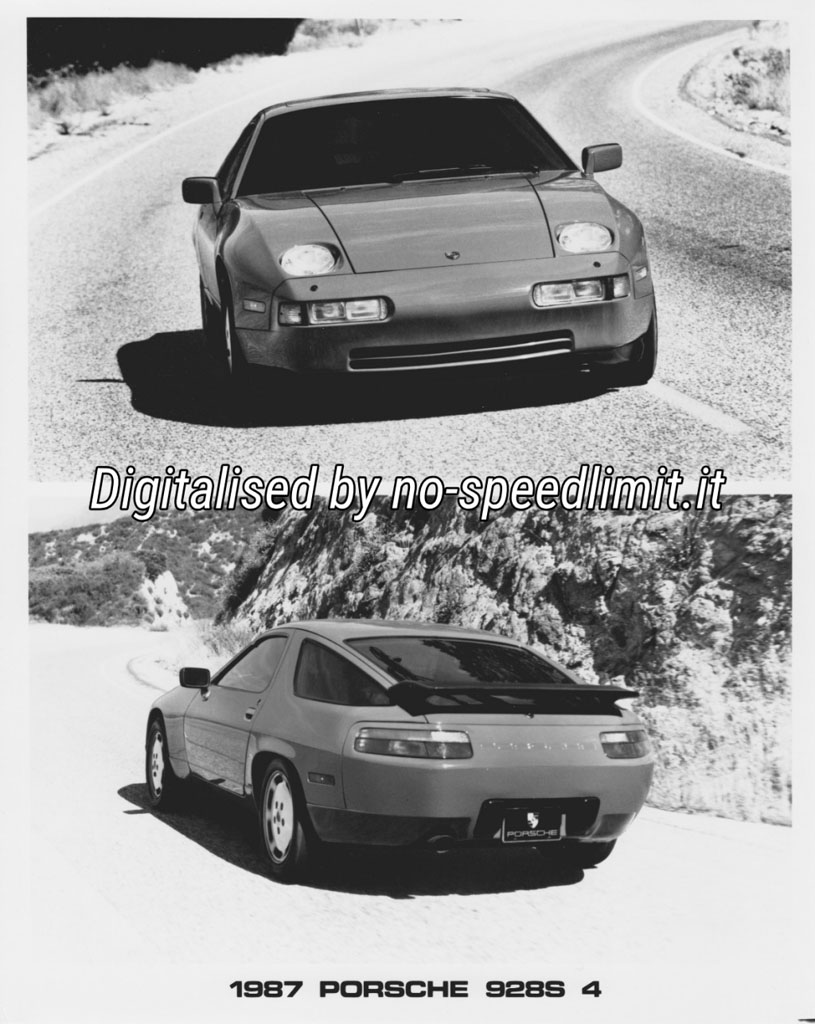 Cook said that the 928s 4's increased performance came from using optimized combustion, a redesign of the sports car's resonant induction system to provide powerful and flat torque characteristics across a broad range, and improved aerodynamics through the redesign of the nose, tail, undercarriage and engine compartment.

"For 1987, portions of the intake system are tuned to be resonant at more than one frequency -- specifically at 3,000 and 4,000 rpm," Cook continued. "Depending upon engine rpm, the engine breathes through one or both of the intake systems, thus delivering almost constant torque across a broad rpm range.

In addition to resonant induction, the 928S 4 now incorporates two electronic knock sensors which allow it to run on a the a wide octane range of unleaded fuels. Knock sensors allow the engine to operate as close as possible to optimal combustion conditions which, in turn, result in maximum power and fuel efficiency.

It was in the area of aerodynamic improvements that Porsche's engineers reached some elegant solutions," Cook said. The 928S 4's coefficient of drag is now 0.34 with virtually no lift at high speeds. With its new, wider 245/45 VR 16 rear tires on eight-inch, forged rims, the car handles easily in all driving situations."

Porsche's engineers and designers incorporated a new nose and front spoiler into the car which carries fog and driving lights and openings for engine and brake cooling. The 928s 4's new tail has "wraparound" stop lights and a new, detached rear spoiler to reduce lift. A belly pan was fitted below the engine compartment to improve air flow beneath the car.

Inside the front of the 928S 4, engineers fitted a computerized louver system to regulate air flow throughout the The louver system opens and closes based on engine compartment. temperatures in the cooling systems and, as a result, minimizes airflow internally to lower drag.

Porsche has added more comfort features for drivers with a new seating adjustment, called Positrol, that remembers three positions for the driver's and passenger's seat and outside mirrors.

"With the touch of a button, the driver can set the seat and mirrors precisely to his dimensions for maximum driving comfort: then with another touch of the button another driver can do the same, Cook said.