The History of Porsche Sports Cars 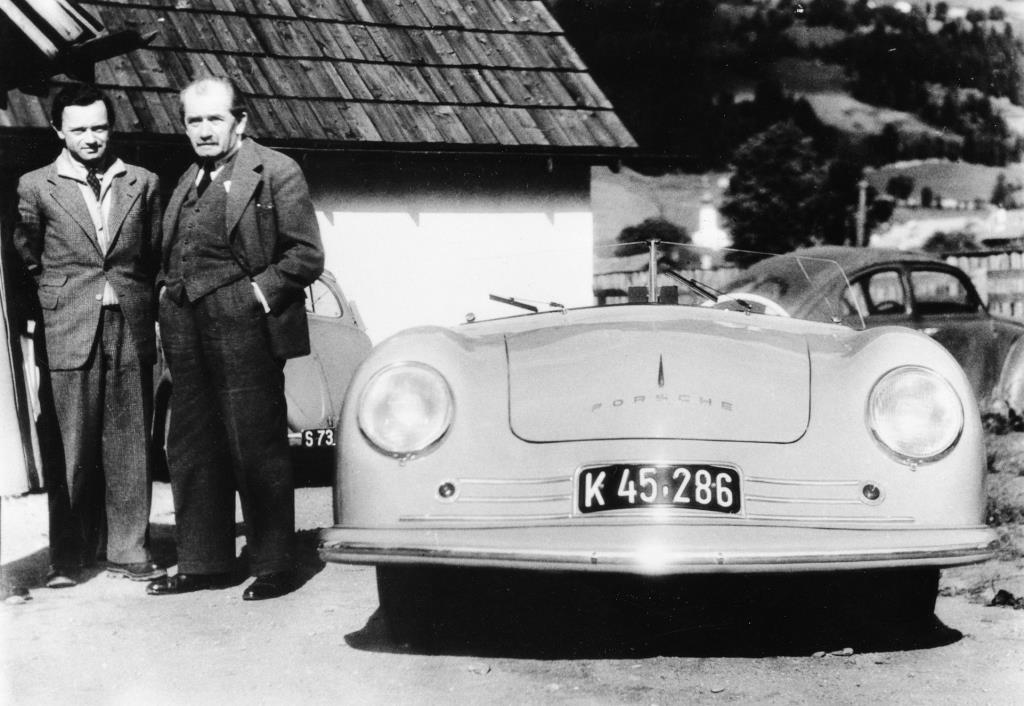 Motoring at Its Very Best

The very first car proudly bearing the name Porsche was built 50 years ago – a 356 roadster with chassis number 356.001. With its modified 1.1-litre VW engine developing 35 bhp at 4000 rpm, the car had a top speed of 135 km/h or 84 mph. Prior to the construction of this first-ever Porsche, the Company had worked exclusively as a design service handling assignments from other manufacturers, the most famous example, of course, being the Volkswagen Beetle. 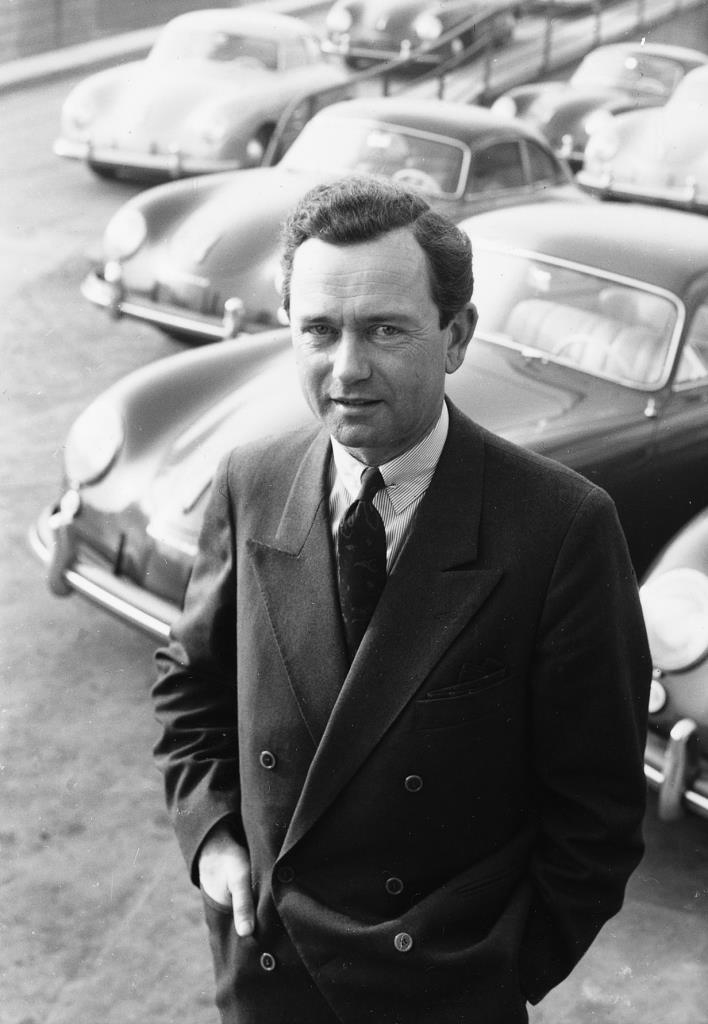 „Every single bolt was just right“

During the war Ferdinand „Ferry“ Porsche (who died on 27 March 1998 at the age of 88) and a handful of his proven, faithful employees had started work on development number 356 in their workshops moved to the town of Gmünd in Kärnten. The first design drawings were completed on 17 July 1947 and on 8 June 1948 the Kärnten state government issued a special permit homologating the car. Returning home after being held by the French as a prisoner of war and bailed out of custody by his family, Professor Dr.-Ing.h.c. Ferdinand Porsche, Ferry’s father, stated right away that „every single bolt was just right“. No 1 was then followed by a small series of 52 additional cars built in Gmünd, production in Stuttgart from 1950 – 1965 subsequently amounting to 78,000 units of the 356 model series. Then, at the 1963 Frankfurt Motor Show, the story of Porsche was continued with the world-famous 911. 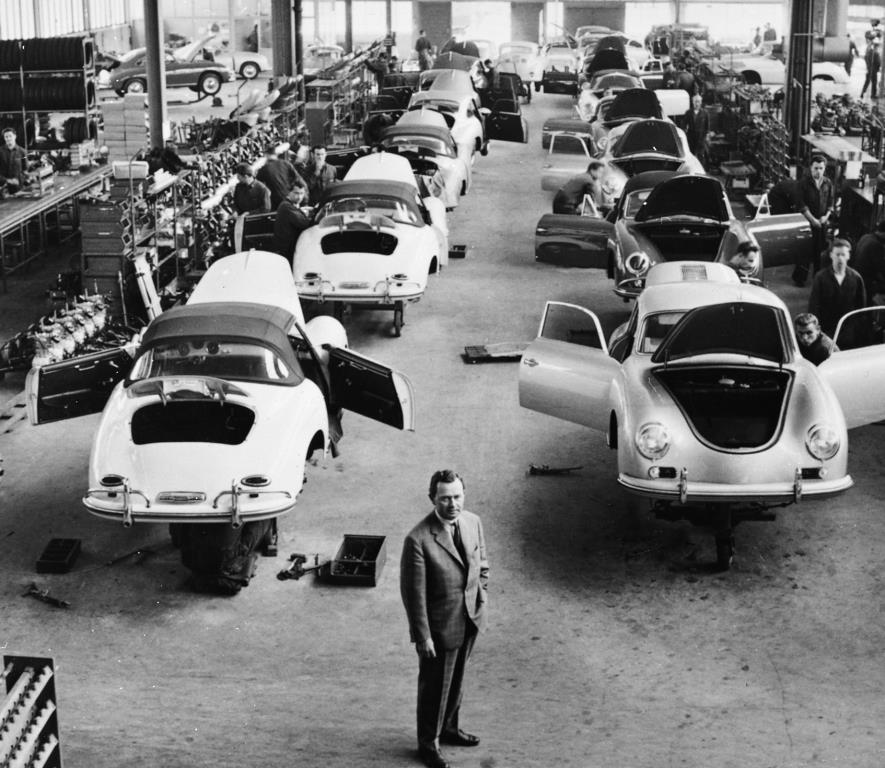 The 911: the sports car with the longest production run ever

„We had to move on from the 356“, said Ferry Porsche, „because basically we had started building the car with VW parts and components“. Despite ongoing evolution of the 356 and the addition of various engines extending up to 2.0 litres and 130 bhp on the road models, Porsche’s very first sports car had its limits. So Ferry’s son Ferdinand Alexander Porsche designed the successor to the 356, the Porsche 911, originally bearing the model designation 901. The four-cylinder engine was replaced in the process by an all-new sixcylinder offering a huge potential for further improvement. Initially, this new flat-six displaced 2.0 litres and developed maximum output of 130 bhp, giving the car a top speed of more than 210 km/h or 130 mph. Even back then one of the car’s technical details was the safety steering system allowing the engineers to „kill three birds with one stone“: Fitted just above the floor panel, the steering transmission left more room for luggage beneath the sloped engine compartment lid, the arrangement of the steering spindle in the middle of the car facilitated the production of left-hand and right-hand-drive models, and the steering column folding if necessary at two points protected the driver reliably in the event of a head-on collision.

Like the Volkswagen Beetle built in huge numbers, the Porsche 911 now looks back at the longest production run of any sports car in the world. A particular highlight in the 911 model range was the 911 Turbo presented by Porsche at the 1974 Paris Motor Show and originally intended for a production „volume“ of just 500 units. By the time the last aircooled 911 was delivered to its proud owner on 31 March 1998, however, Porsche had built and sold no less then 32,335 Turbos for customers the world over.

Over and above decades of development activities for Volkswagen, Porsche started cooperating even more closely with VW when Ferry Porsche decided to introduce a sports car below the 911 price range. With the engineers in both Wolfsburg and Stuttgart- Zuffenhausen being convinced that the mid-engine concept was the right approach, the Porsche 914 saw the light of day in 1969 as a mid-engined sports car with a removable roof and a four-cylinder injection engine displacing 1.7 litres supplied by VW and then followed by the two-litre six-cylinder taken from the 911 T to create the Porsche 914-6. With the engine of the 911 T at the time developing 125 bhp and marking the entry level into the 911 model series, the power unit featured in the 914-6 developed maximum output of 110 bhp.

Another product of Porsche’s close cooperation with VW was the Porsche 924 originally developed for Volkswagen but then becoming a fully-fledged Porsche in 1975. The first-ever Porsche with Transaxle configuration, a water-cooled engine fitted up front and the transmission on the rear axle, the 924, together with its successors, the Porsche 944 and 968, saw a total production run throughout a period of 20 years of 325,231 units equal to approximately 30 per cent of Porsche’s total output.

The only sports car ever to win the title of Car of the Year was built in Zuffenhausen from 1977 to 1995: the Porsche 928 gran turismo which, leaving aside the 911 Turbo, consistently remained the most expensive production Porsche to be admired on the road. Sold to approximately 61,000 purchasers the world over, the Porsche 928 already came with an all-aluminium power unit at a time when most car manufacturers still used heavy grey-cast-iron engines. Maximum output back in 1977 was 240 bhp from 4.5 litres, the last version, the 928 GTS, developing 350 bhp from 5.4 litres and accelerating, thanks to its enormous torque of 500 Nm (369 lb-ft), to 100 km/h in just 5.7 seconds. Top speed was a very impressive 275 km/h or 171 mph, clearly proving the enormous power and performance reserves of this thoroughbred gran turismo. Secure roadholding even in tight bends and optimum directional stability under load change were ensured by the rear-wheel suspension developed especially for the 928, a suspension which soon gained world fame as the Weissach axle. So long before other manufacturers started to think about „four-wheel steering“, Porsche’s engineers anticipated this technology back in the ‘70s by introducing a mechanical solution without any sensitive electronic gadgetry.

Since September 1996 the Porsche Boxster, combining the driving dynamics of a thoroughbred sports car with unlimited everyday driving qualities, has offered a new performance and safety standard in the open sports car market. Featuring a novel roof opening/closing mechanism, the electric roof of the Boxster opens and closes within just 12 seconds, that is at a speed and with a degree of efficiency never seen before.

The Boxster stands out from its keenest competitors through its mid-engine concept with a flat-six power unit typical of Porsche (2.5 litres, 204 bhp/150 kW) – an engine which even under practical driving conditions makes do with less than 10 litres of premium plus/100 km (which means it returns fuel consumption better than 28.2 mpg Imp). And thanks to a drag coefficient (Cd) of just 0.31, the Boxster is able to achieve a top speed of 240 km/h or 149 mph which, together with acceleration to 100 km/h in 6.9 seconds, makes it the leader in its class. 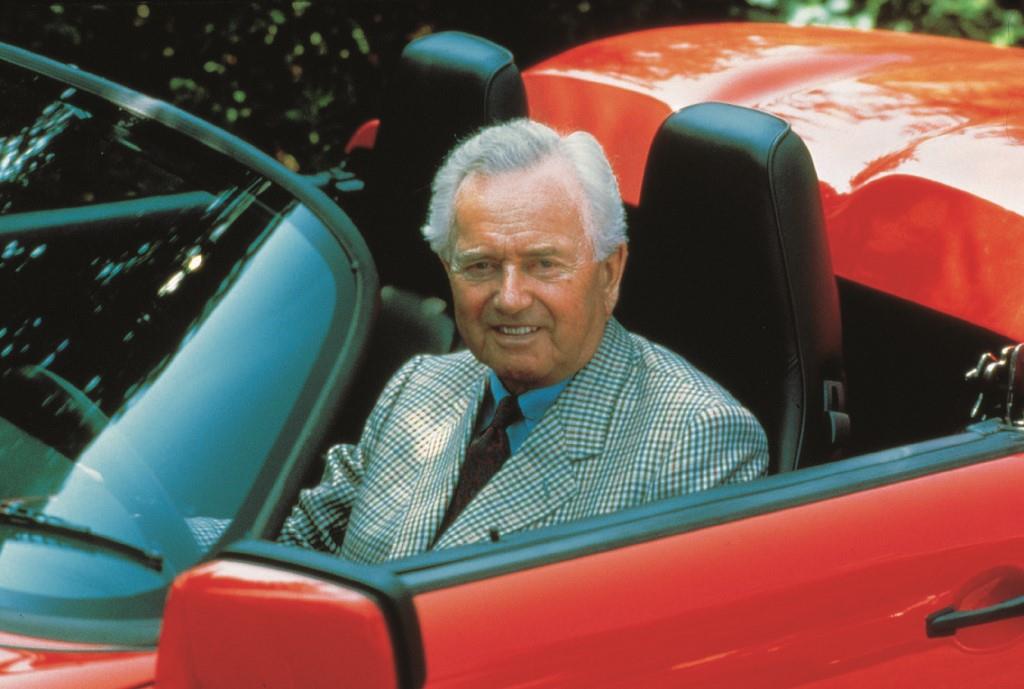 Porsche 911: a never-ending story of success

In autumn 1997 a water-cooled six-cylinder horizontally-opposed power unit in the 911 replaced its air-cooled predecessor after no less than 34 years in the market. Smaller in size (3.4 litres), the new engine in the Porsche 911 is more powerful, offers even better performance, but is also more fuel-efficient and compatible with the environment. Maximum output is 300 bhp or 221 kW at 6800 rpm, maximum torque 350 Nm or 258 lb-ft at 4600 rpm. With emissions being reduced to a minimum, the new 911 outperforms even the strictest Euro standard. And the car’s noise level also remains below the standards to be applied in future, although it is of course still characterised by that unique „911 sound“. In its design for the 21st century, the Porsche 911 nevertheless remains faithful to the Company’s traditional line. But it is clearly distinguishable as a new model since, while retaining that typical 911 silhouette, Porsche’s designers have streamlined and smoothened the body throughout, significantly improving the car’s aerodynamic coefficient in the process, the Cd factor dropping from 0.33 to 0.30.

Customers the world over have unanimously applauded the work done by the engineers and designers at Porsche’s Development Centre in Weissach, demand for the new car exceeding even the greatest expectations. And demand has increased to an even higher level with the introduction of the new 911 cabriolet, aficionados of Porsche sports cars already waxing lyrical about the „never-ending story“ of the 911. 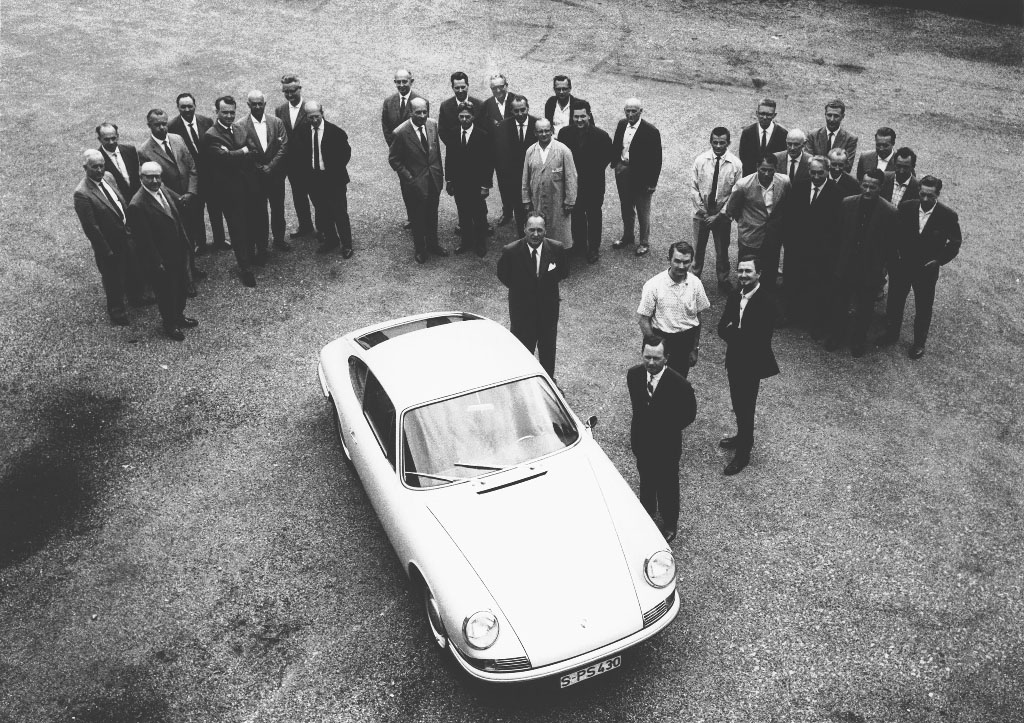 Forty Years of the Porsche 911 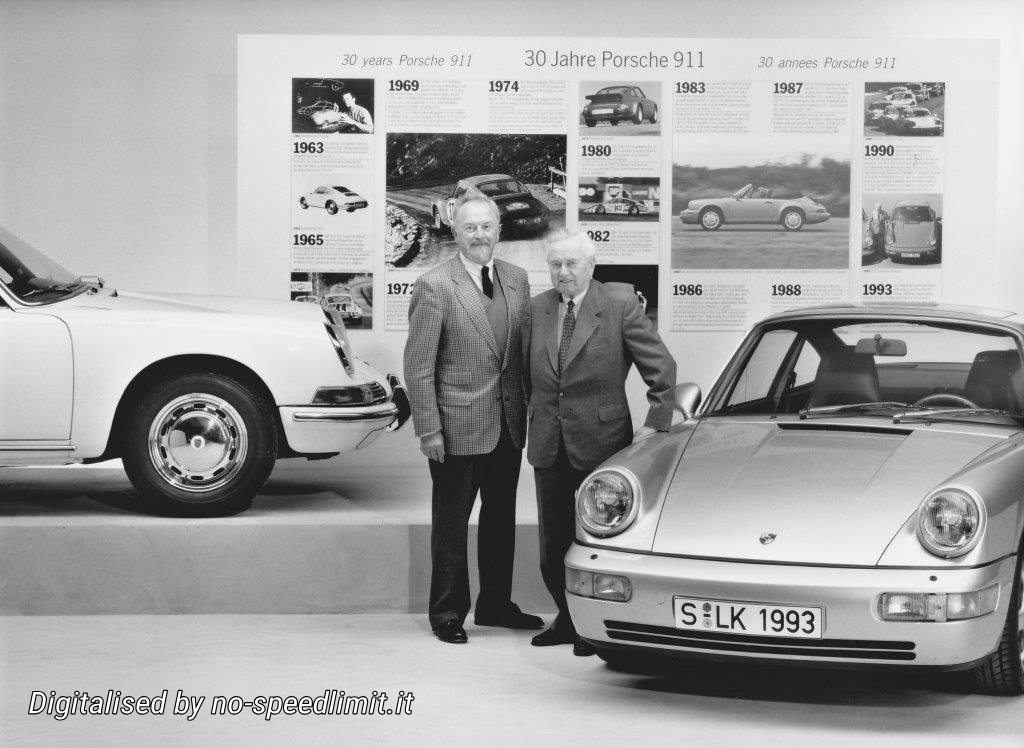