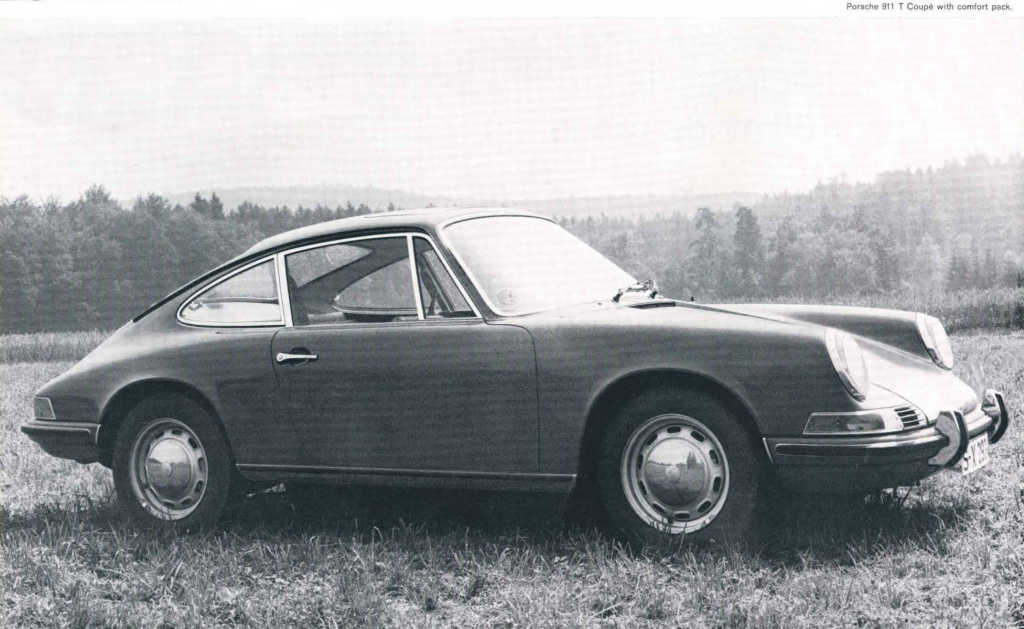 Concept of the PORSCHE 911 model range

Vehicles in the 911 model range may be considered as fast and luxurious touring cars with a distinct sporting accent. All three models share the same basic technical conception. Location of the air cooled horizontally opposed engines at the rear provides the best possible compromise between good aerodynamic form, available space and the demands of safety for the occupants. The dual circuit brake system operating on ventilated discs at all wheels, and the all-round independent suspension are features which, like the horizontally opposed six-cylinder engine design, have withstood repeated arduous tests in competition events.
The three models in the range, the 911 T, E and S, cover the complete scale of available equipment specifications and power outputs, and are offered either with Coupe body styling or as 'Targa' models for those who prefer an open car.
The technical specification of any model can be extended by a range of options; from the wide selection available we would draw special attention to the 'Sportomatic' selective automatic transmission which can be specified on the 911 T and 911 E models. 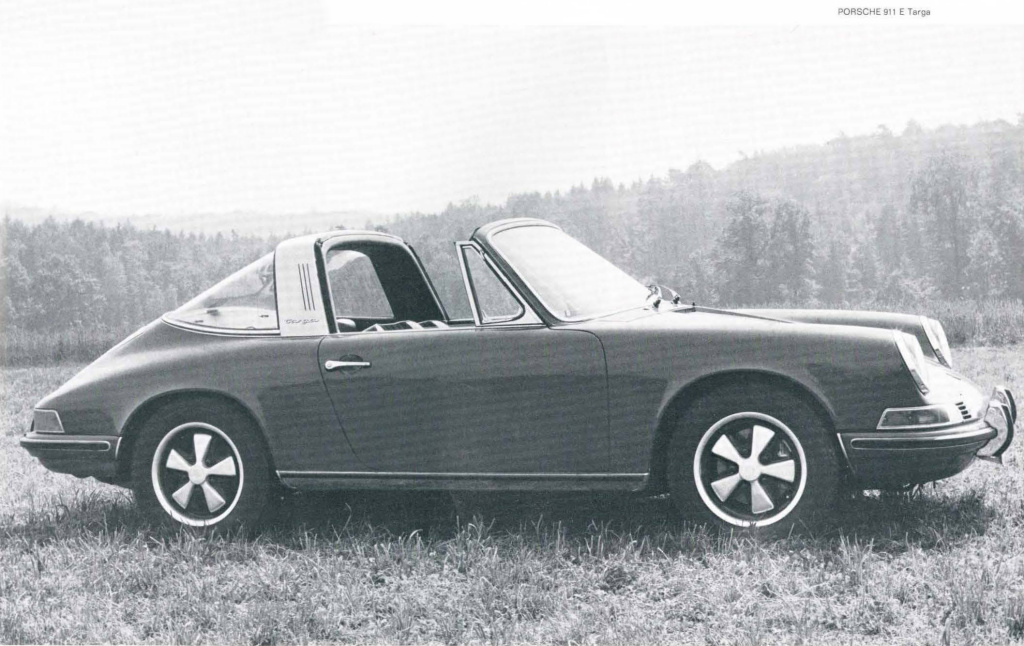 Vehicles in the 911 model range feature the characteristic Porsche streamlined styling. This is not merely designed for striking or fashionable effect, but is governed by pure engineering considerations. The bodyshell, including the underside, is as smooth as possible for uninterrupted airflow, and the resulting low drag coefficient enables high road performance to be obtained from sensibly dimensioned and thus economical power units.

The load bearing all-steel bodyshell is welded to a frame and floor panel assembly to form a single unit.

The high, domed windshield and the safety roll bar with vertical rear window ensure that the open car can be driven with a minimum of disturbing air currents and wind noise. In this way the VW-PORSCHE 914 models represent an ideal combination of the best features of a sports coupe and a convertible.

The low height of the mid engine enables the waistline to be kept low in turn. Electrically operated pop-up main headlamps form a harmonious continuation of the elegant lines. Additional halogen headlamps are installed as standard in the front bumper. Wide shaped rubber strips above the bumpers provide protection against minor damage when maneuvering and parking. 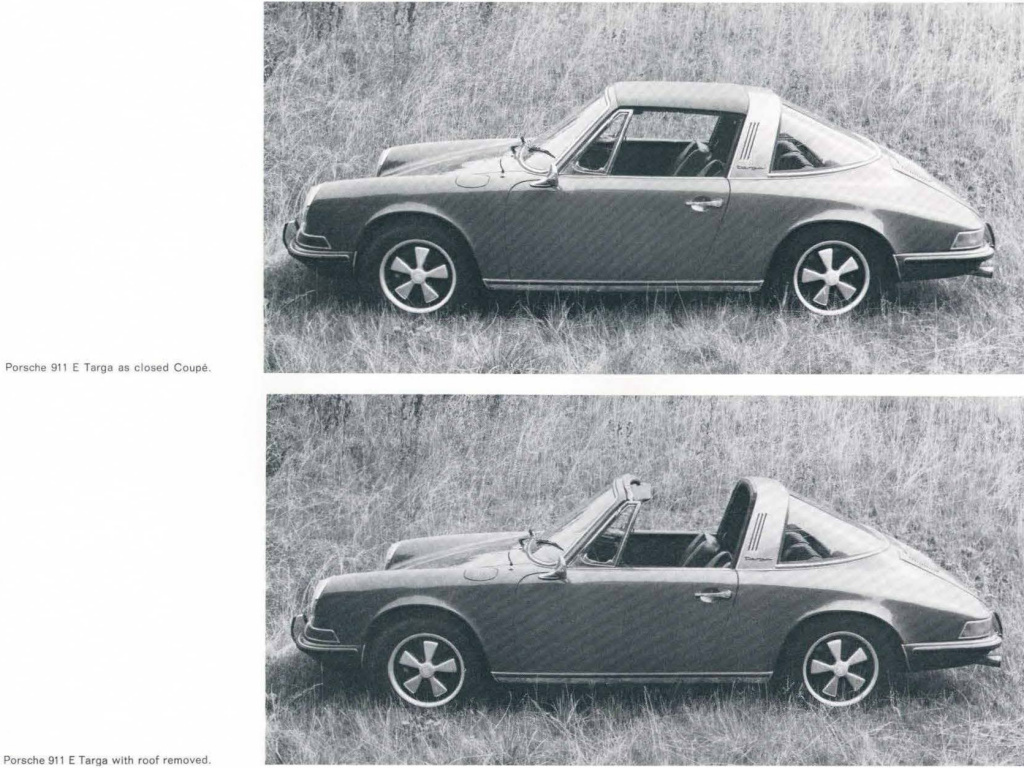 The passenger compartment takes the form of a torsionally rigid safety cell protected by front and rear sections designed to absorb impact energy. The front fenders are bolted on for ease of replacement, and all electrical wiring, control cables and linkage is fully enclosed within the center tunnel of the floor panel assembly.

The underbody leaves the factory with full PVC underseal. 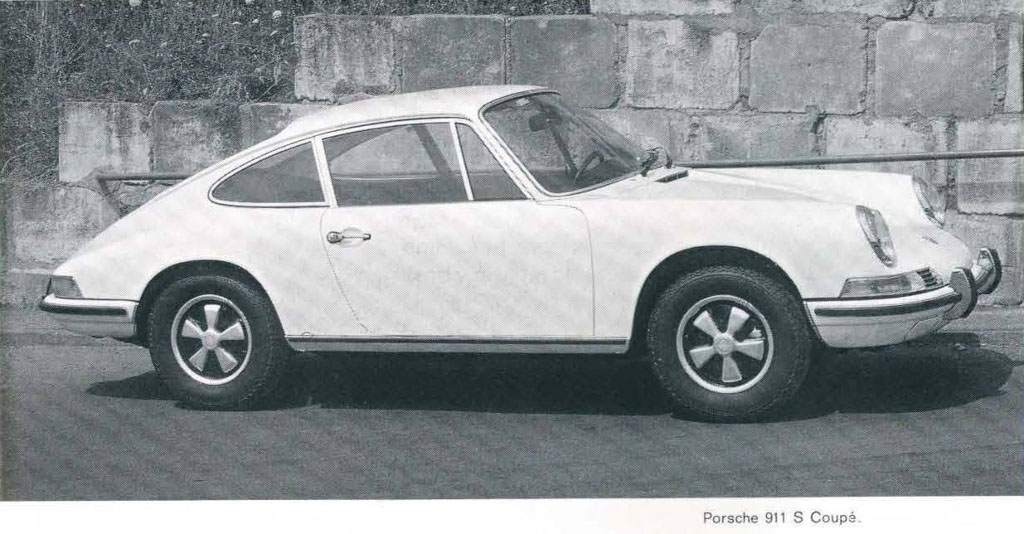 The open-top 'Targa' version has a safety roll bar which cuts downdrafts and wind noise to a great extent. 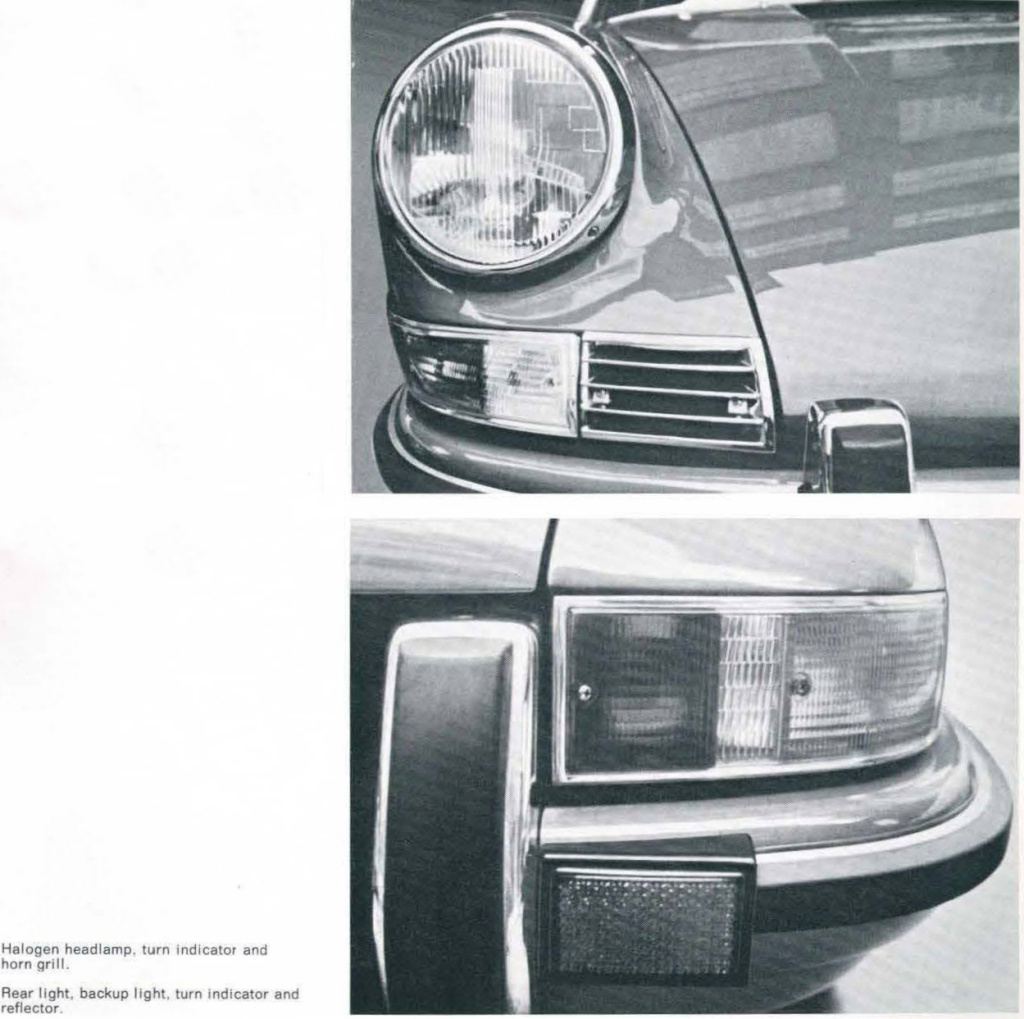 The layout of the interior and the instrument panel on PORSCHE 911 models, is planned to meet the demand for rapid, effortless operation of all controls and easy reading of the instruments.

All instrument dials are non glare, and placed within the driver's field of view. Without removing his hands from the steering wheel rim, the driver can reach 2 combination switches on the steering column which operate the three-speed wipers, windshield washer, turn indicators, headlamp flasher and high/low beam headlamp switch. 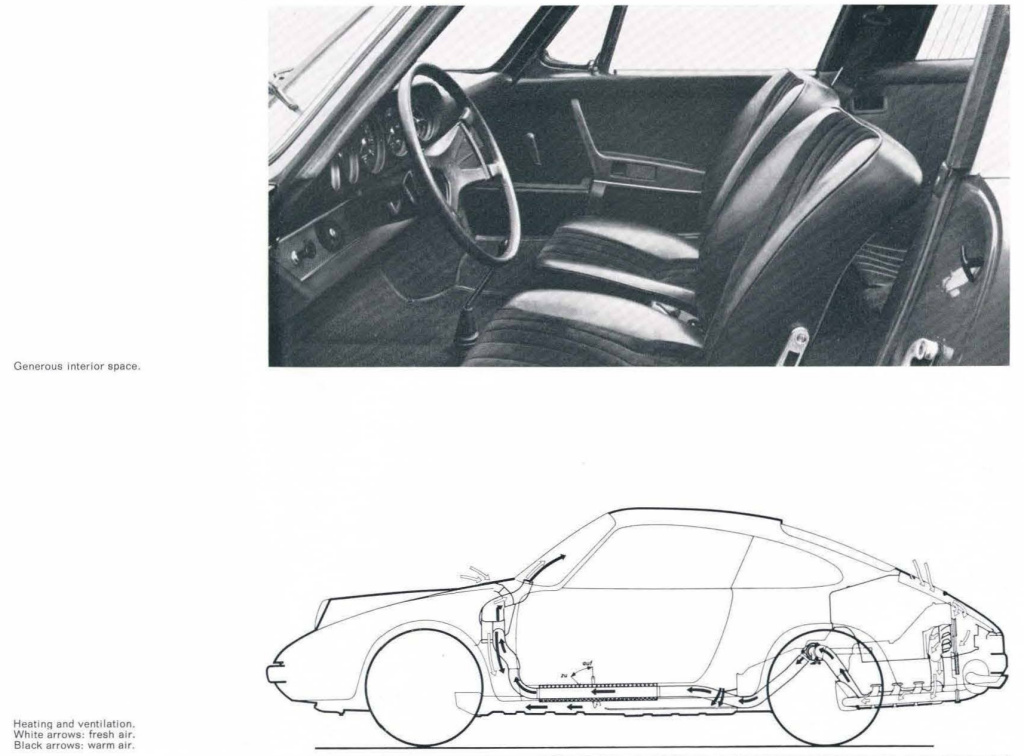 The passenger compartment is of ample size to provide both driver and passenger with unrestricted freedom of movement. On short journeys additional seating accommodation is provided by the rear emergency seats. If the rear seat backs are folded forward a flat surface is obtained which can be used to carry extra items of luggage.

The front seats are of anatomically correct pattern and are mounted low down and close to the car's center of gravity. The 'bucket' type seats provide the occupants with adequate lateral support for fast driving. Fore and aft seat adjustment and seat back angle variation ensure comfort in a variety of driving positions and allow the passenger to relax on long journeys. 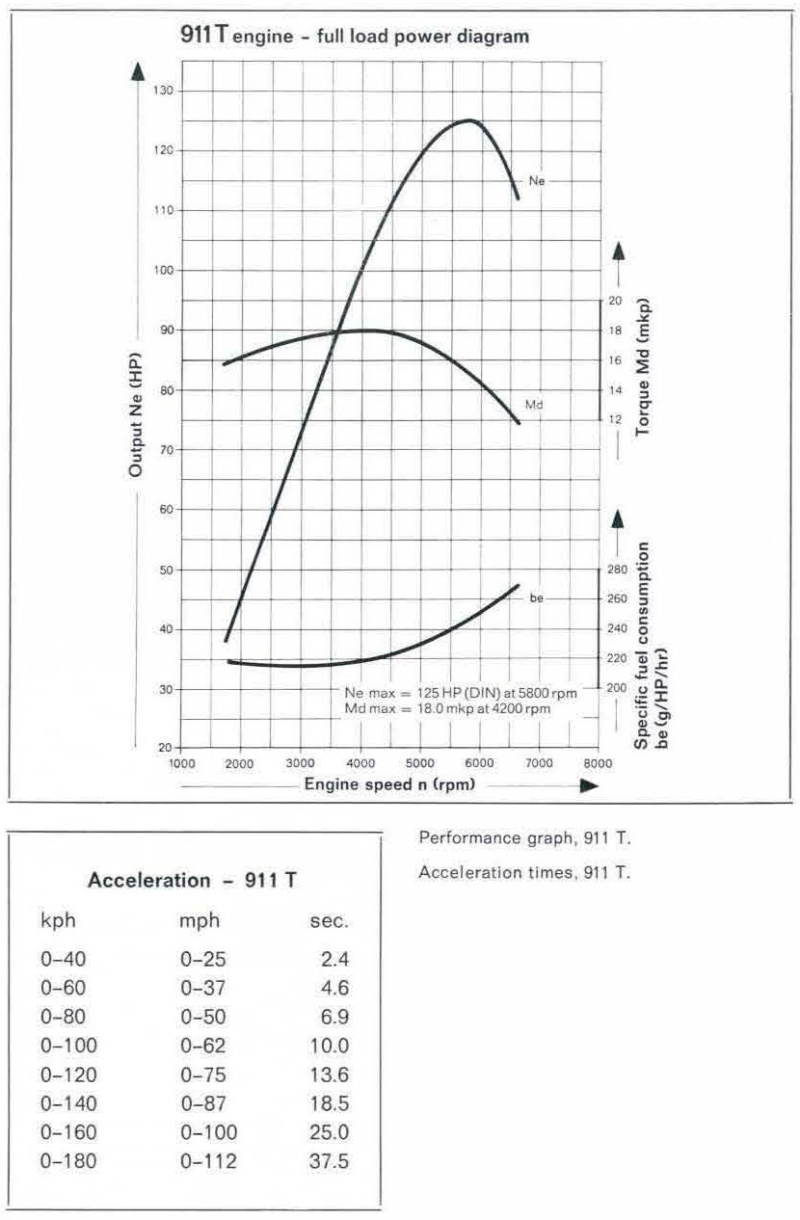 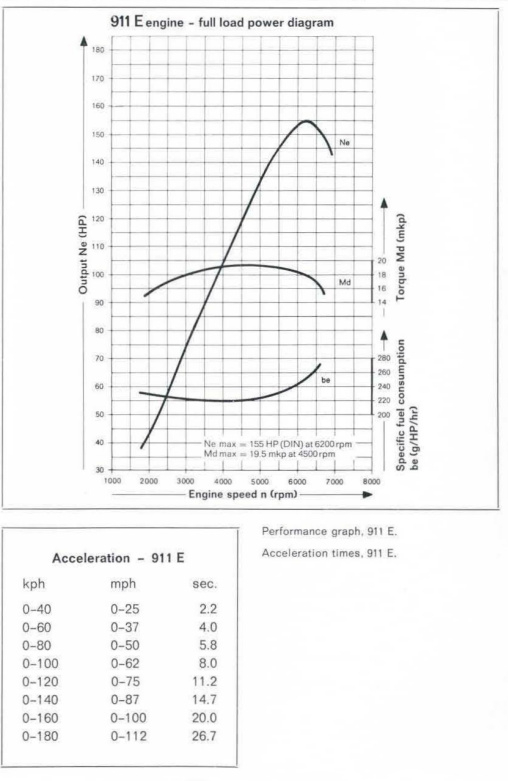 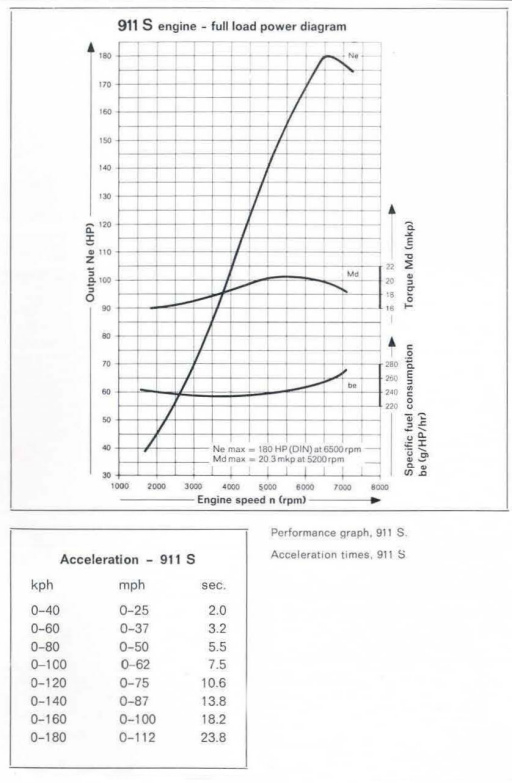 Correctly chosen overall gear ratios ensure that the top speed can be maintained continuously if so desired.

The 'E' power unit is designed to develop its power at quite low engine speeds, but the 'S' engine does not reach maximum output until the engine is turning over much faster(about 5500 rpm). In other words, the 911 S engine is tuned to a certain extent for competition driving, whereas the 'E' power unit has been designed for the needs of day to day road use.

All six cylinder units, including that installed in the VW-PORSCHE 914/6, have high tension battery/capacitor ignition. 911 E and 911 S models have the Porsche 5-speed gearbox as standard, the 911 T and E can be supplied with the optional Porsche Sportomatic transmission.

The chassis with its independent wheel suspension all round is also the same in principle on all PORSCHE 911 models. Detail technical modifications are made purely to suit the varying performance characteristics of each model.

The independently sprung front wheels are located by lower wishbones in conjunction with shock absorber struts. The springing medium is an adjustable longitudinal torsion bar.

On the 911 E both springing and damping functions are carried out by a hydropneumatic strut with automatic self leveling action.

The 911 S is provided with an anti-roll stabilizer.

Drive is taken to the rear wheels through double universal joint half shafts. All joints are maintenance free. The 911 S has an additional anti roll stabilizer. 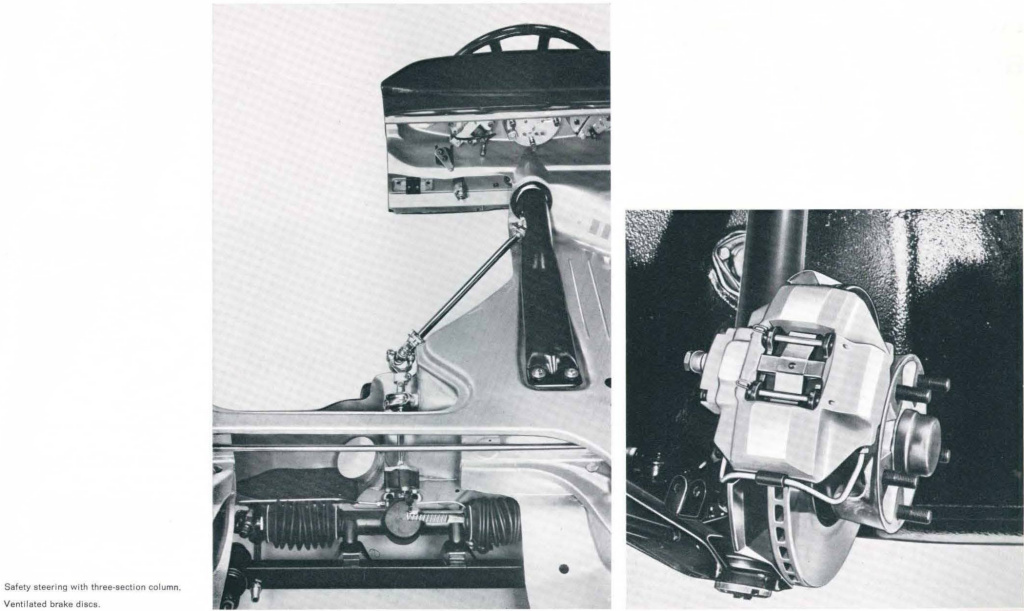 For reasons of safety the steering column of the rack and pinion steering gear is in three sections and cranked to provide impact protection. No-maintenance universal joints are used to connect the sections together. In conjunction with a four spoke steering wheel with recessed boss and large area padded horn push, the system offers the driver maximum possible collision protection. 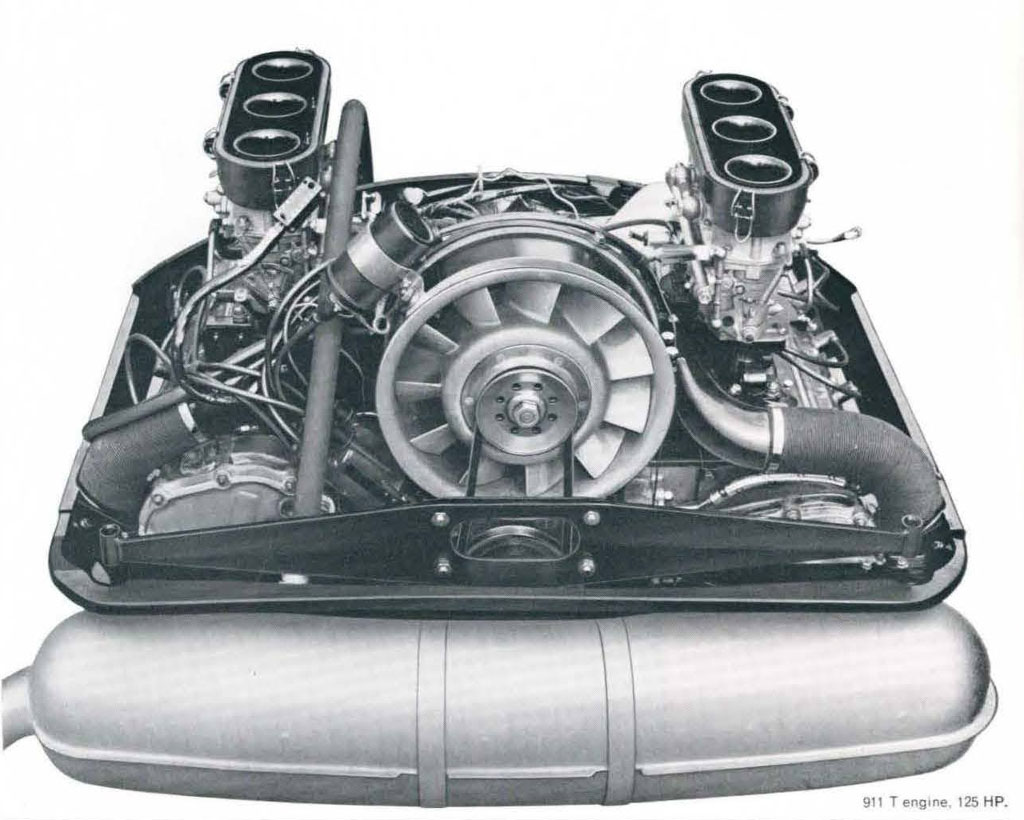 The air cooled six cylinder power units installed in the 911 model range are of basically identical engineering design, but in contrast to the similar unit used in the VW-Porsche mid-engined sports car they are installed behind the rear axle rather than in front. This makes greater interior space available, so that 2 additional emergency seats can be provided. The six cylinders are horizontally opposed in two banks of three on either side of the crankcase, and have bolted-on heavily finned light alloy heads. The overhead valves are arranged in inverted V pattern and operated by rockers from a single overhead camshaft on each cylinder bank. The forged crankshaft has eight main bearings.

Dry sump lubrication ensures that all bearing points receive a steady supply of oil even during fast cornering. The lubricating oil passes through a full-flow filter and a thermostatically controlled oil cooler.

The alternator and axial engine cooling blower are driven by Vee belt from the crankshaft.

Unlike the 911 E and S engines, the 125 HP unit employed in the 911 T has two triple barrel downdraft carburetors which supply mixture to the engine through short intake pipes. The relatively limited output of this engine makes it a willing and undemanding power unit for this end of the 911 model range. Its power output and torque curves are smoother and less 'peaky' than those of the other engine types. 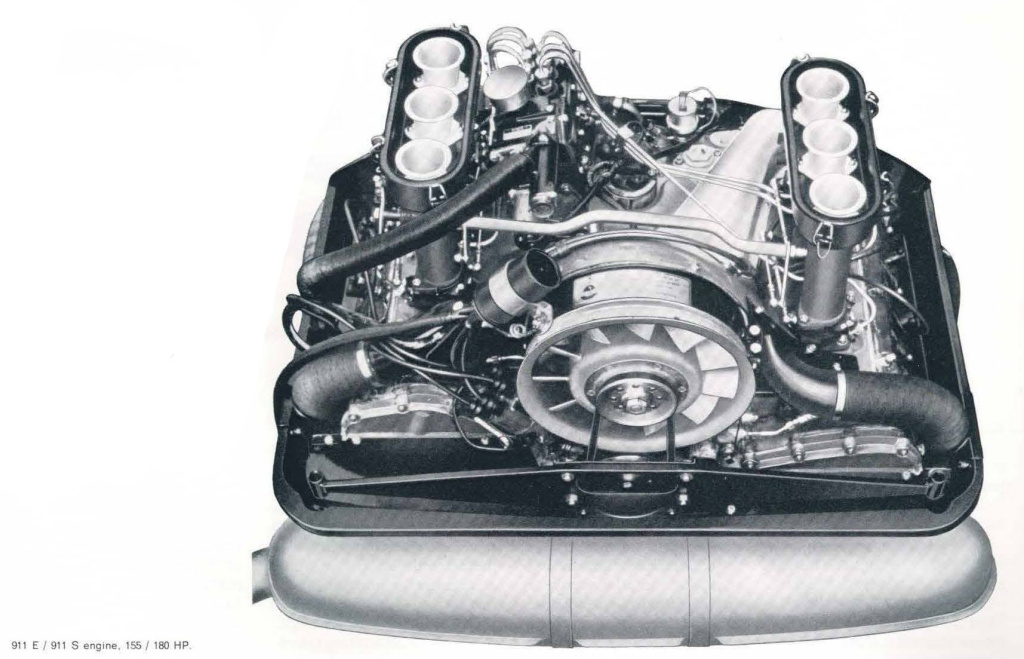 In contrast to the 911 T unit, the 911 E and S engines are supplied with fuel-air mixture by a mechanical manifold fuel injection system. In addition to the higher output of 155 HP (911 E) or 180 HP (911 S) thus made possible, the Bosch fuel injection system has the following advantages: reduced fuel consumption when the car is driven at varying speeds, better pulling power in all engine speed ranges and less sensitivity to changes in air temperature and pressure. The 911 S has in addition a second oil cooler.

As an optional extra the standard manual gearbox on the 911 T, 911 E and 914/6 models can be replaced by the Porsche Sportomatic transmission.

This selective automatic transmission enables the driver to shift gears as and when he likes. But gear shifts are no longer essential. When forced to 'swim with the stream' in heavy traffic no advantage is gained from continual operation of the gear lever, and in the long run gear shifting can become tedious in such situations. The Sportomatic transmission combines two well known and tested design principles: a modern hydrodynamic drive train, usually referred to as a hydraulic torque convertor, and the Porsche all synchromesh four speed gearbox with parking lock. The torque convertor operates as a starting clutch, provides continuously varying torque multiplication of the force transmitted by the engine, and thus adapts itself automatically to any driving situation. The shift clutch necessary to interrupt the drive when shifting gears also disengages automatically as soon as the driver starts to move the gear lever.

The high efficiency of the hydraulic torque convertor, in conjunction with the fast gear shifts possible with the Sportomatic, enable almost the same road performance to be achieved as in a Porsche with conventional clutch and gearbox.

The Sportomatic shows its superiority in heavy traffic, when hill climbing and on icy roads, where accidental or uncontrolled jerking movements when gear shifting or surges of power at the rear wheels can be quite dangerous. 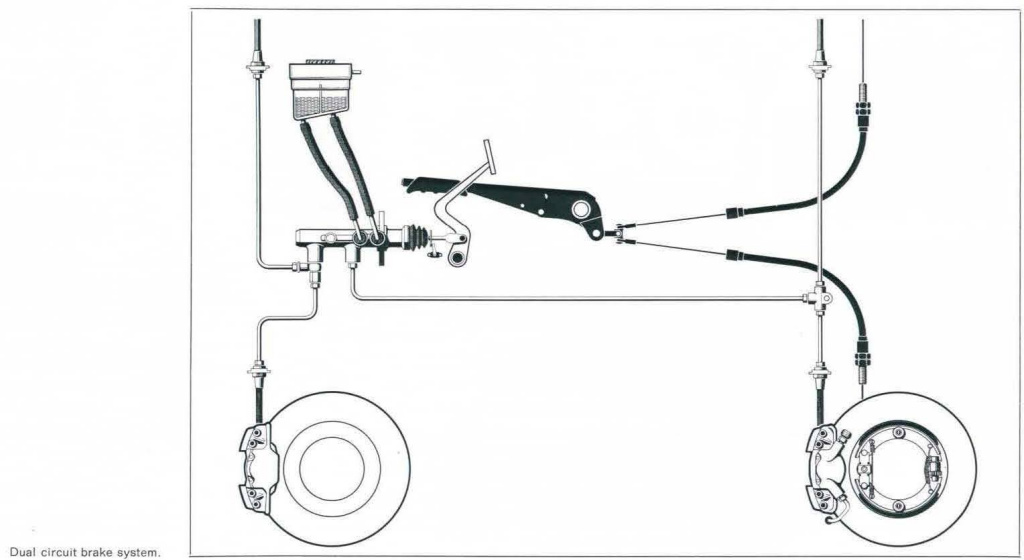 PORSCHE 911 cars have a very low center of gravity and good front/rear weight distribution, with 42% on the steered and 58 % on the driven wheels. Excellent roadholding is the result. Sparkling acceleration from Oto 100 kph (0 to 62 mph) in 10 seconds (911 T), 8 seconds (911 E) or 7 .5 seconds (911 S) helps to take the risk out of potentially tricky situations and cut down overtaking times.

The 4 generously dimensioned disc brakes (all with ventilated discs for best possible cooling) lose none of their efficiency even after repeated heavy applications, since they incorporate automatic pad wear compensation. The dual circuit brake system ensures that adequate braking force is always present should one circuit fail.

Accurate straight-ahead running, outstanding roadholding and light-action, direct steering make it possible for the driver to react to a sudden obstruction by a violent movement of the steering wheel, without risk that the car will start to slide. Anatomically correct seats provide good lateral support for fast cornering, reduce fatigue and ensure the freedom of movement essential for fast reaction in an emergency. When the vehicle is moving stale air is extracted continuously from the interior, another measure useful in combating fatigue. Easily operated controls and levers, each marked with a symbol indicating its function, ensure that the correct control is operated instinctively and thus enable the driver's attention to be concentrated on the road. Non glare instrument dials and halogen headlamps aid safety when driving at night. The three-speed wipers are combined with a windshield washer to guarantee clear vision under all conditions and full information regarding the movements of other vehicles. 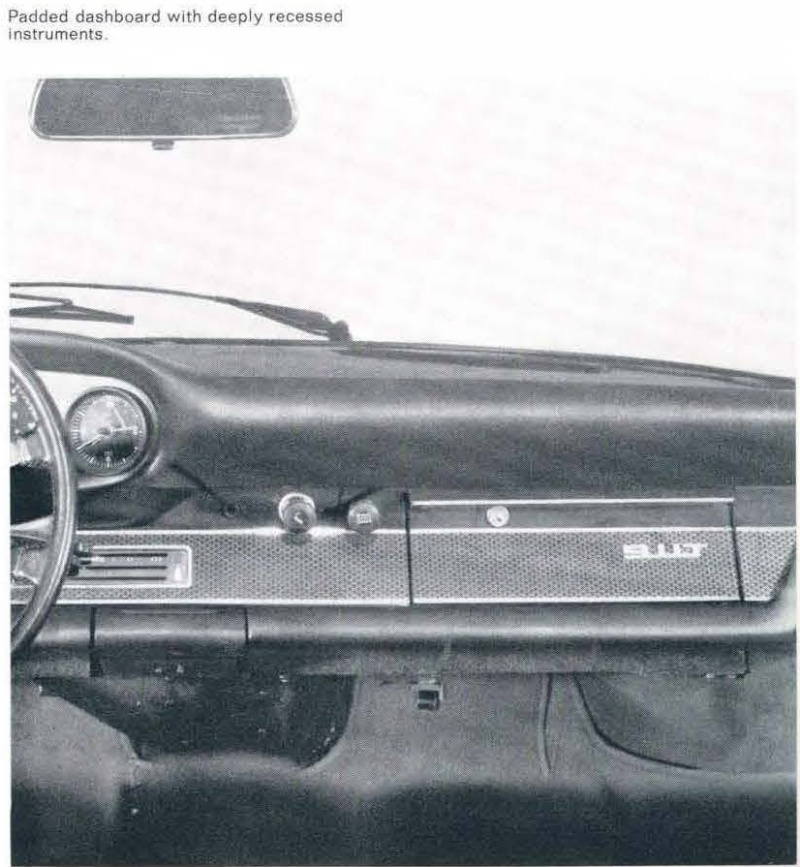 Numerous measures to reduce the after-effects of an accident have be introduced on the 911 model range:

Impact energy is to a large extent absorbed directly by the all-steel bodyshell. This is fully self-supporting and encloses the rigid central passenger compartment. The front section, in contrast, comprises a crushable energy absorbing zone. On the 'Targa' versions the safety roll bar ensures that rigidity and occupant safety is just as high as on the Coupe. It is worth mentioning that the emergency hazard warning system has separate circuits for the front and rear flashers, so that in the event of a nose to tail collision damaging one end of the car the flashers at the other end continue to function.

To protect the driver and occupants the designers of the 911 range have provided a three piece cranked steering column, a steering wheel with recessed boss, a padded dashboard with deeply recessed instruments, smooth surfaced padded or flexible control knobs and a laminated safety glass front windshield.

What are the differences between the PORSCHE 911 T, E and S models? 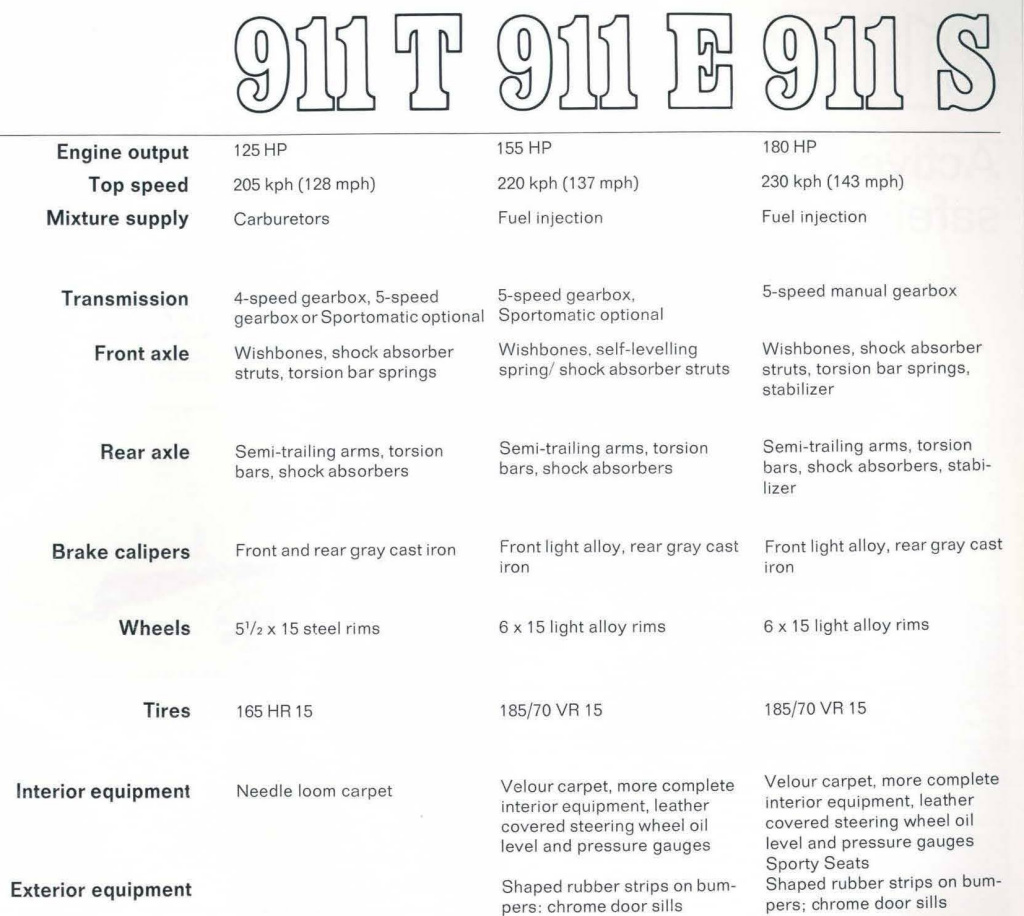 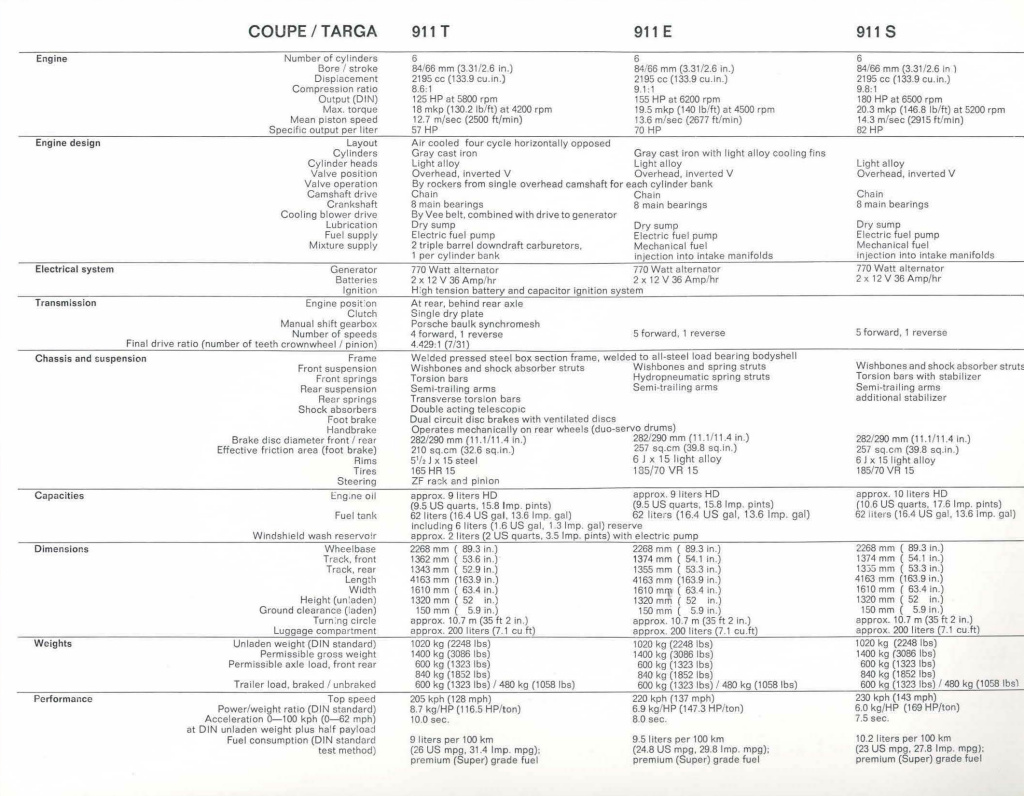 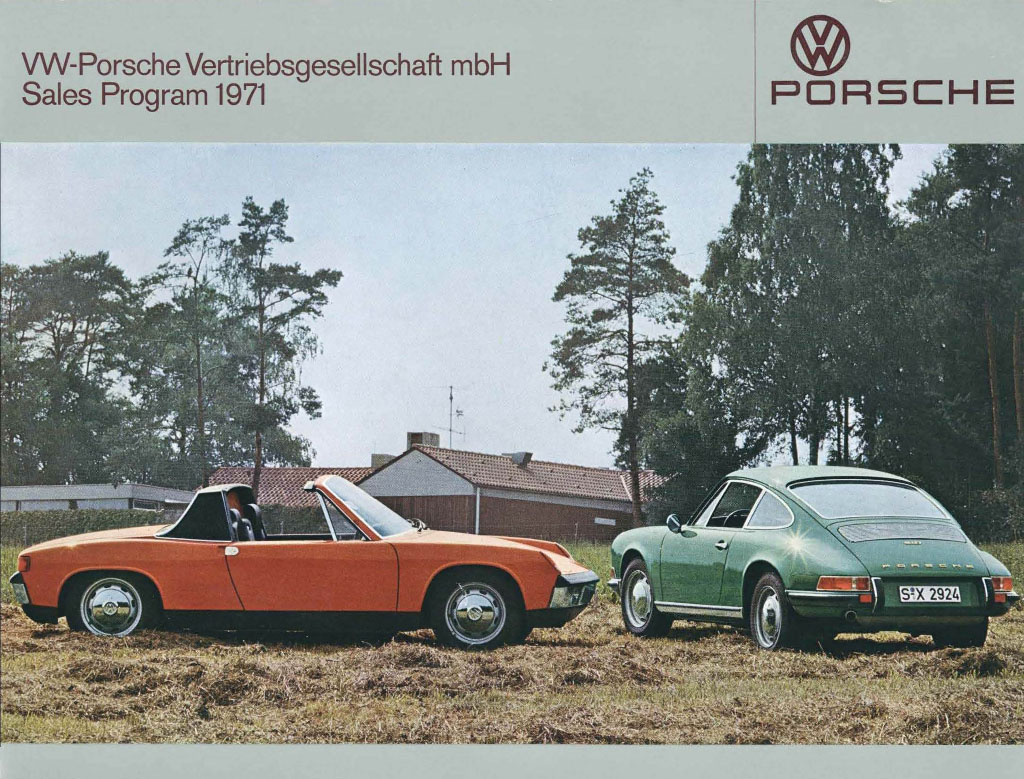 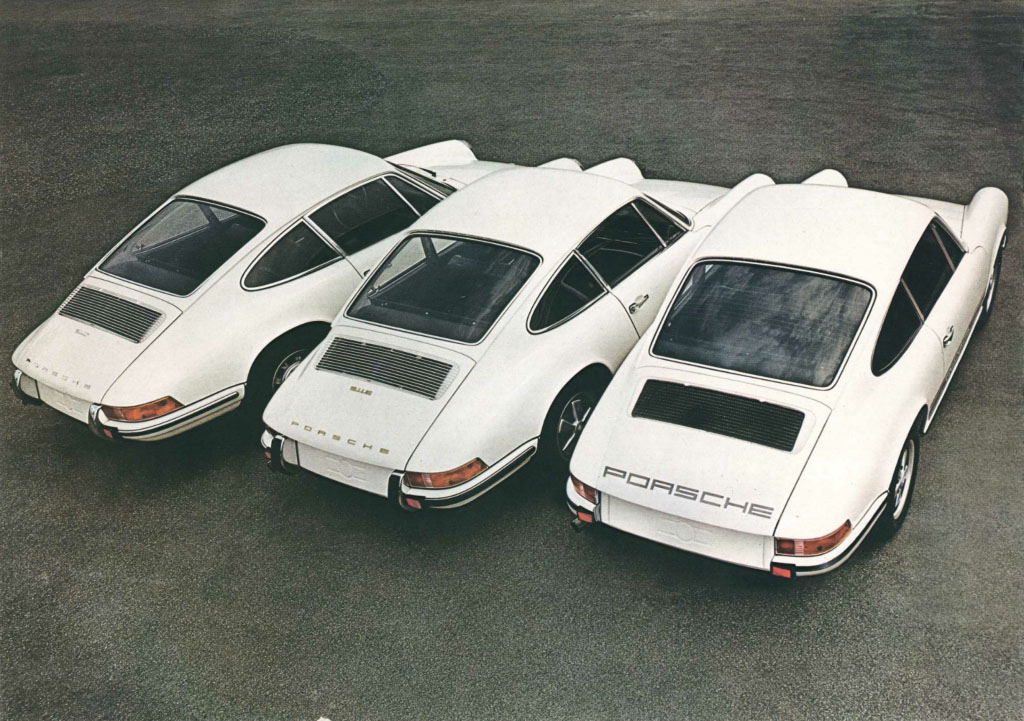 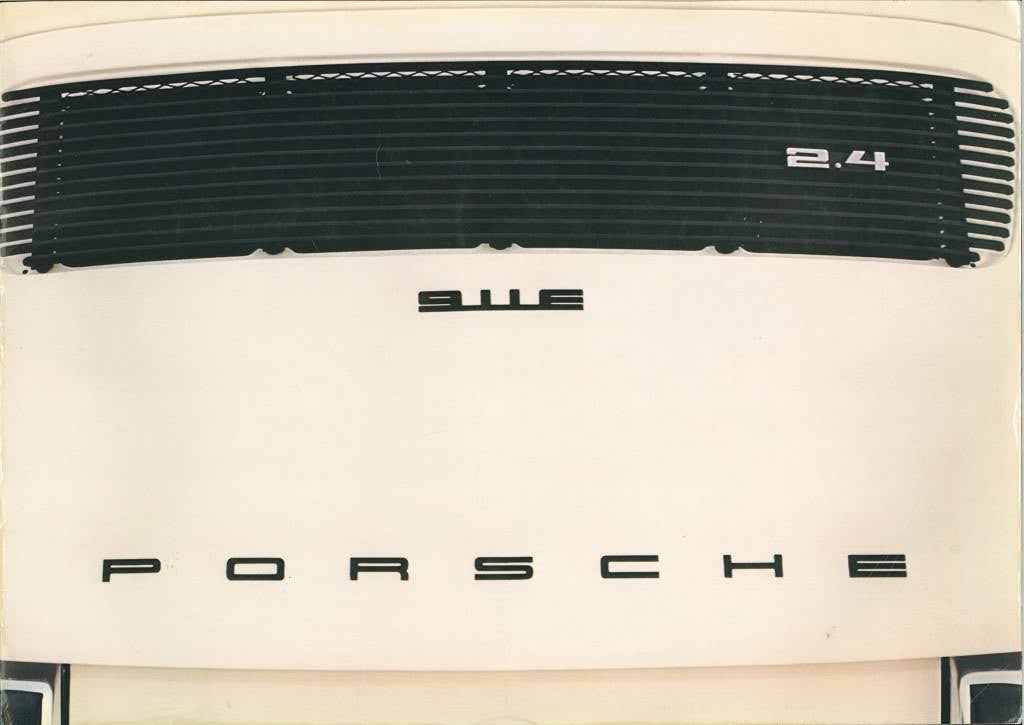