Absorption of delivery charges and initial servicing Costs on the UK mainland into the price of the 1982 model Porsches represent even better value for British customers. This coupled with various technical improvements and holding prices to the previous level, will improve the already successful formula which has resulted in Porsche sales running at a record level in Britain. According to the SMMT, at July 31 a total of 1,386 Porsches had been registered in this country during 1981 compared with 1,268 at the same time last year, an increase of 9.3%.

For the 911 SC customer, the optional Sport pack will now include the 911 Turbo style front and rear spoilers, as well as sport seats, The Turbo rear sport dampers, forged alloy wheels and low profile tyres. spoiler, an aerodynamic "wing' on the engine cover, is more effective than the previous design in creating downforce for improved safety at higher speeds.

The 924 and 928 models benefit from improved interior ventilation, and have strengthened roof sections so that greater loads can be carried on roof racks.

A new option for British customers on the 924 Turbo is the availability of 928 S style forged alloy wheels equipped with 50-series tyres. 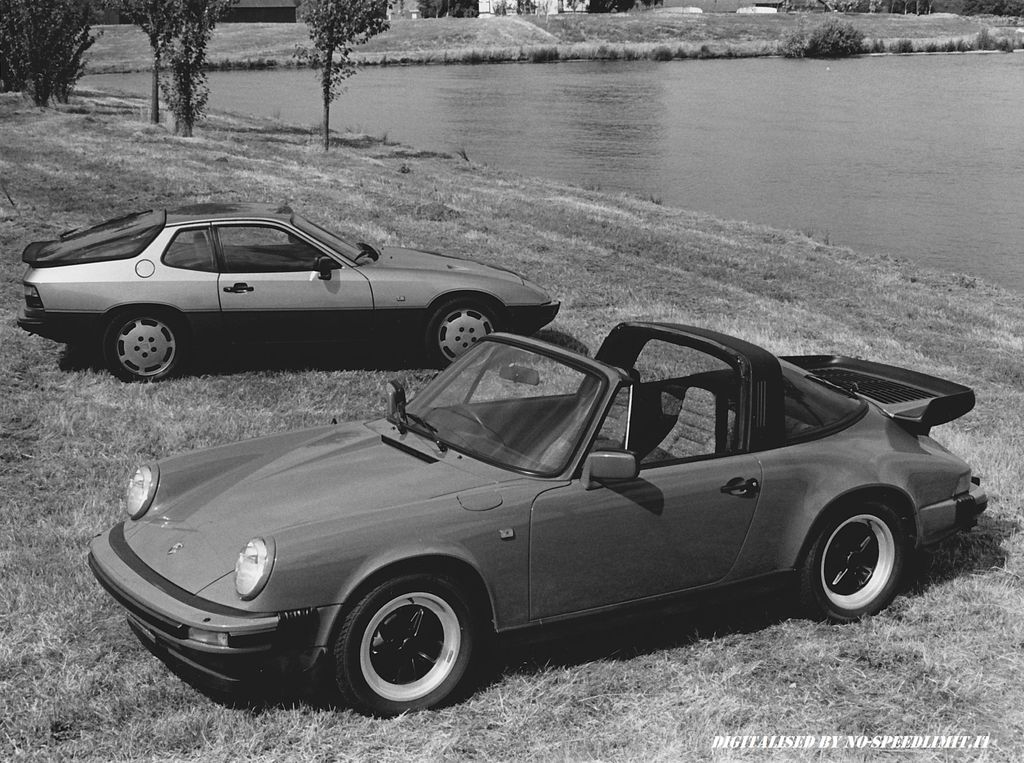 Two new options from Porsche for 1982 are the Turbo style front and rear aerodynamic devices for the 911 SC, seen on a Targa, and 928 S style forged alloy wheels for the 924 Turbo.

With production having passed the 100,000 mark within five years, demand for the 2-litre 924 model continues strongly, and in the seven months to July 31 British registrations of the model were 228 up on last year's record total.

At £9,582 including Car Tax and VAT, the Porsche 924 Lux represents excellent value today having a 7-year anti-corrosion warranty, 12,000- mile service intervals (just an oil change at 6,000 miles), and a notably high resale value.

The engine, developing 125 horsepower, is placed at the front and drives the rear wheels via a rear-mounted transaxle 5-speed manual or 3-speed automatic gearbox. It is from this economical sports car that the more powerful 924 Turbo and Carrera GT models were developed.

In common with other 924 and 928 models the roof has been strengthened so that heavier loads can be carried on the roof rack, if fitted. The payload increases from 35 kg to 75 kg (165 pounds).

The 924's interior trim is improved on the '82 model with carpeting on the restyled door pockets, and Porsche metal badges on the glove locker lids.

More importantly for summertime motoring, the capacity of the fresh air vents - there are four at fascia level - has been increased by re- designing the air control flap in the system.

A year ago the Turbo's engine characteristics were improved by increasing the compression ratio and fitting a smaller turbocharger unit, making the engine at once more flexible yet more powerful and economical. Mechanically the 924 Turbo, still priced at £13,998, is unchanged for 1982, but as with the 924 model the roof has been reinforced to take a heavier roof rack load.

Inside the car, the fresh air ventilation system has been improved and the Turbo shares with the 924 the carpeted door pocket.

For the British market, the 924 Turbo will have the option of forged alloy wheels, similar in appearance to those on the 928 S. 16-inches in diameter, slightly narrower than those on the 928 S at 6 inches rim These are width, and carry low profile 205/55 VR 16 tyres.

An improved Panasonic stereo radio/cassette system, the CQ 953 EG, is included in the car's standard equipment, in conjunction with three speakers and an electric aerial.

The Porsche 944 will, as stated at the time of its announcement, make its world debut at the Frankfurt Show this month, and its British debut at the London Motorfair in October. The production line starts up at the end of this year, and fully equipped right-hand drive cars will go on sale next Spring at a price just below that of the 924 Turbo.

This model will have a four cylinder all-aluminium engine of 2 litre capacity, producing 163 horsepower, and has a particularly good torque curve. Automatic and 5-speed manual transmissions will be available.

The 'traditional' Porsche - air cooled, rear engined, with an alloy flat-six engine - 911 SC model reaches its 18th birthday this autumn with 3-litre engine capacity and 204 exhilarating horsepower at the driver's command. One visual change concerns the alloy wheels, which now have black centre sections and polished rims. A technical change on the SC, and on the 3.3 litre 300 horsepower 911 Turbo, is to uprate the alternator capacity from 980 to 1050 Watts.

British customers are offered a Sport pack version incorporating a front air dam and rear wing, forged alloy wheels, sport dampers, low profile tyres, and sport seating. For 1982 the aerodynamic devices will be identical to those on the Turbo, providing more downforce at speeds rendering the car more stable in a straight line, and less prone to sidewind buffeting and to aquaplaning.

The introduction of the 300 horsepower 'S' version greatly strengthened the appeal of the 928, so that the two models together account for a large slice of the over £20,000 sports car market. High performance with total luxury are the key attractions of the 928 (4.5 litres and 240 horsepower) and the 928 S (4.7 litres/300 horsepower). Fully automatic air conditioning is available on both models, as is leather upholstery, metallic paint options, a choice of fully automatic or 5-speed manual transmissions, the latest Panasonic CQ 953 EG stereo radio/cassette system, and so on...there are very few extras:

For 1982 the dashboard layout on both versions will include a fuel economy meter, indicating to the driver the most economical driving mode. Fresh air ventilation is improved with 10 percent more flow through the fascia and door vents.

The 928 model, still Costing £21,827, will now have the 'S' version four-spoke steering wheel fitted as standard, and the previously optional coin box and cassette holder on the centre tunnel now becomes standard equipment.

The 928 S, still costing £25,250, benefits from various refinements, anong them a new specification for the standard electrically operated seats,so that the driver's seat no longer moves to its forward position when the backrest is tilted